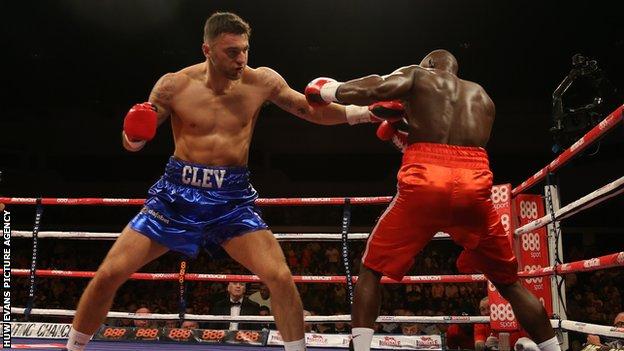 Nathan Cleverly made an impressive debut at cruiserweight with a second-round stoppage of Shawn Corbin.

The Welshman returned to the ring for the first time since losing his WBO light-heavyweight title to Sergey Kovalev in August 2013.

But Cleverly, 27, delighted the Cardiff crowd to claim the vacant WBA Inter-Continental title against the 39-year-old WBC Caribbean champion.

Corbin was sent reeling by an uppercut and Cleverly finished him off in style.

The Cefn Fforest fighter had weighed in at 14st 2lb for Saturday's bout at the Motorpoint Arena, with Corbin registering 13st 13lb on the scales.

Cleverly eased his way into the first round, with neither fighter seeming unduly troubled by his opponent.

But Cleverly stepped up the tempo impressively in the second, forcing Corbin back before snaking an uppercut through his defence.

The Guyana-born boxer was clearly dazed and his guard dropped, allowing Cleverly to unload with lefts and rights on Corbin's chin that gave the referee little option but to step in and end the fight.

Injuries had delayed Cleverly's comeback three times, but after his impressive debut at the 14st 4lb limit his career seems back on track.

Topping the promotion at the Motorpoint Arena was Lee Selby, who moved closer to a world title fight after beating Romulo Koasicha in their WBC International title eliminator.