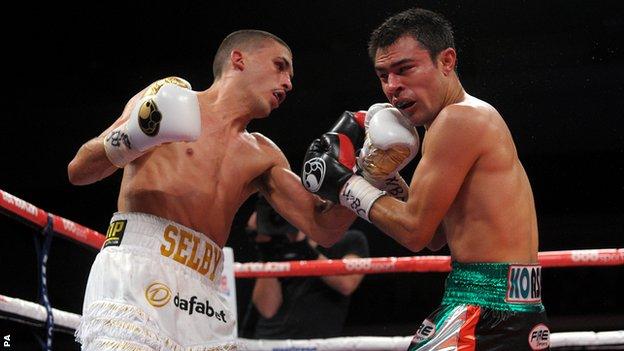 Selby, 27, was mostly in control in Cardiff but his 23-year-old Mexican opponent did find his way through with some good shots in the middle rounds.

Koasicha tried to take the centre of the ring but Selby was always quick to come forward behind his punches.

Selby was caught by a good combination in the third but shrugged off the impact to continue his sharp work, regularly landing his shots first.

Koasicha experimented with fighting off the back foot in the fifth, trying to bring Selby on to him to change the pattern of the fight.

But the Welshman was too streetwise to fall into any trap and Koasicha soon reverted to his come-forward style.

Selby suffered a cut near his right eye from a good punch, but his corner did good work between rounds to stem the problem.

Koasicha enjoyed his best round in the seventh as he caught Selby with an uppercut, staggering the man from Barry, while a big left in the eighth stiffened his legs momentarily.

But Selby regained his composure to reassert some measure of control for the remaining rounds with some accurate combinations, although Koasicha was still able to find the occasional mark against his elusive opponent.

But an unanimous points decision was Selby's just reward for a good night's work, earning his right to move up to challenge better opponents.

Selby is likely to have another fight or two against respected ranked opponents before getting his world title chance, with former WBO super bantamweight champion Nonito Donaire one possibility.

Filipino fighter Donaire faces Simpiwe Vetyeka in Macao in China on 31 May for the WBA Super World featherweight title.

Selby was heading the bill at the Motorpoint Arena, which also featured an impressive debut at cruiserweight by Nathan Cleverly.

The contest before had seen former WBA light-welterweight champion Gavin Rees beat Gary Buckland in his final fight before retirement.

Elsewhere on the card, Paul Smith made short work of opponent David Sarabia, finishing off the Spaniard in the second of their scheduled eight-round light-heavyweight contest.

Despite six months away from the ring Smith looked impressive and could now be in line for a shot at WBO super-middleweight champion Arthur Abraham.

It was a good night for the Smith family, as younger brother Callum Smith retained his WBC International super-middleweight title and unbeaten record in impressive style, dropping Swansea's Tobias Webb four times in the second round with hurtful body shots.

Swansea light-welterweight Chris Jenkins took his record to 15-0 with a seventh-round stoppage of Miguel Aguilar, lightweight Mitch Buckland earned a decision over Daza Usher, and Robbie Turley won in two after super-bantamweight opponent Marc Callaghan was forced to retire with a shoulder injury.

Dale Evans' welterweight bout with Mark Douglas was declared a draw after an accidental head clash left Evans cut, while Maerdy's Alex Hughes claimed a last-round knock-out in his four-round professional debut against Mark Till.