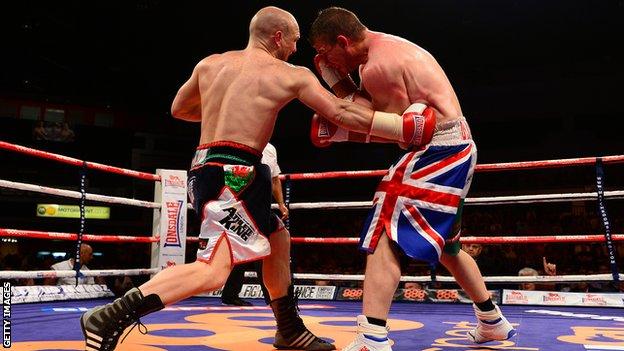 Buckland won a narrow points verdict over Rees in a British lightweight title eliminator in February.

But at the same Motorpoint Arena venue in Cardiff, Rees showed all his class and bravery to bow out in style.

Rees had pondered retirement after the previous loss to Buckland but decided to carry on for one more fight and faced his 27-year-old opponent in a rematch, although this one fought at light-welterweight.

As in their previous encounter the two men were eager to stand toe to toe and trade blows in the early rounds, with Rees bleeding profusely from the nose after round four.

But when the bell sounded again Rees changed tack, using his greater experience to stand back and pick off the younger man with some accurate shots as Buckland charged forward.

Having lost the fifth Buckland responded impressively, showing greater patience in his approach as he rose to match Rees' boxing skills.

A big ninth round from Rees had Buckland blowing on his stool at the break but he weathered a mini-crisis at the start of the 10th and again raised the tempo, leaving Rees with a slight cut over the left eye.

Rees kept Buckland at distance in the 11th, slipping away and countering beautifully with hurtful combinations.

The two men embraced at the start of the 12th, a show of respect between the two friends, but that was a prelude to Rees showing all his class in the last round of his professional career.

The final bell was greeted by a standing ovation from all inside the Motorpoint Arena, which was followed by a deafening cheer when Rees was confirmed as the winner on a split decision.

Rees, a former British and European champion, secured the WBA world light-welterweight title in 2007 with victory over Souleymane M'baye.

He lost his belt to Andriy Kotelnyk in March 2008 but reignited his career by winning the Prizefighter competition the following year.

After taking the British and European lightweight titles he was given a shot at becoming a two-weight world champion against then WBC lightweight champion Adrien Broner in February 2013.

Rees was outclassed by the American in Atlantic City and suffered defeats to Anthony Crolla and Buckland in his following two fights.

But Rees brought his 38-fight career to a close with one more win, having lost just four with one draw in a record to be proud of.

Topping the promotion at the Motorpoint Arena was Lee Selby, who moved closer to a world title fight after beating Romulo Koasicha in their WBC International title eliminator.

Elsewhere on the Cardiff card, former WBO light-heavyweight champion Nathan Cleverly made an impressive debut at cruiserweight with a second-round stoppage of Shawn Corbin to claim the vacant WBA Inter-Continental title.