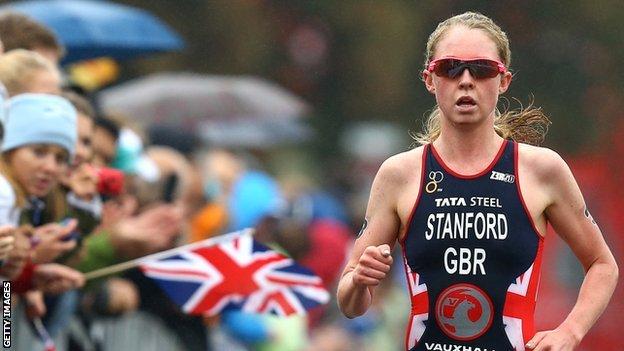 The 25-year-old has resumed training after being sidelined with a foot injury in March and is confident it will not hinder her preparations for the Commonwealth Games in Glasgow in July.

She reveals the injury means she has given up on defending her world title, but Stanford is now focused on the Commonwealth Games, where she will represent Wales alongside former double world champion Jenkins.

Jenkins has returned to the World Series following a year out with injury and finished third and second in the opening two races of the season in Auckland and Cape Town respectively.

However, another former World champion, Leanda Cave, revealed she had not been picked for the Commonwealth Games with Stanford saying she understood her frustration at missing out.

Things are moving in the right direction and I'm up and about on two feet and on two wheels so I'm a very happy person right now.

Now, when I look back, it seem like the time's gone quite quickly.

I'm used to doing so much training so in those first couple of weeks where I literally couldn't do anything, physically I felt terrible.

I felt like I'd put on about two stone. I obviously didn't but you just feel like you have no control over your body and you feel lethargic.

But I kept myself as busy as possible. I have loads of friends and family that visited me and kept me company.

At one point, I was really worried and it feels like you're never going to get back, but back running for an hour is really fantastic. I felt on top of the world.

I'm really hoping to be back racing for the Europeans, which is in mid-June.

I train with a lot of the girls that race and waving them off from my doorstep as they fly off to New Zealand, South Africa and lately Japan has probably been the toughest bit.

I haven't watched one of the races on TV - I've been out on my bike every single time.

When I've been out on the bike I've been consciously pushing really hard because I know they're all racing hard.

This year the ITU decided that they would increase the number of races you had to do for the series.

It was an interesting decision and I know there's a lot of reasons why they've done it.

But for me it does mean that I've had to give up any ambition I had of defending my world title, which was tough and took me quite a few weeks to come to terms with.

I've had to give up on that one but there's always the Commonwealth Games and that was always the main focus of the year.

If I won the Commonwealth Games, that would make up for everything.

I was fortunate to do some training with her over the winter and we knew she was in great shape and things were looking great for her.

It's tough to come back from being out for a year. Those first few races I know she was really nervous and apprehensive and we were like 'You'll be fine, don't worry'.

It is hard after injury and Helen had such a tough time with it and we were all so pleased she's back.

I think the whole triathlon community, even people from all over the world, were so delighted to see Helen back on the podium and back racing, because she's just a fantastic athlete.

Helen for world champion this year? Definitely, we want to keep it in Wales don't we!

'Standing on my own two feet'

My parents have always been incredibly supportive. Bank of mum and dad have helped a lot over the years.

Initially I definitely needed the bank of mum starting out. It's probably only the last year that I was able to stand on my own two feet and provide for myself.

I'm really fortunate that I've had the support of UK Sport and British Triathlon over the last few years as well which helps.

I think with a lot of Olympic and elite sports it's only really the top people that can support themselves and make a living out of it.

There's a lot of athletes below who are struggling to make ends meet and literally race to put food on the table and then make it to the next race in order to win some more money.

It's really tough and being from Britain we are very fortunate that we're well looked after and there is support out there.

Some of the other athletes from around the world do struggle.

When I'm running I love it when Fleetwood Mac comes on the shuffle.

I was brought up with it on in the house when I was younger and it's stayed with me.

I love the older music, the golden oldies. I think that's my parents' influence, growing up listening to Mike and the Mechanics, Sting and The Police and The Beatles.

That's what's on my iPod. I don't know whether I should admit that!