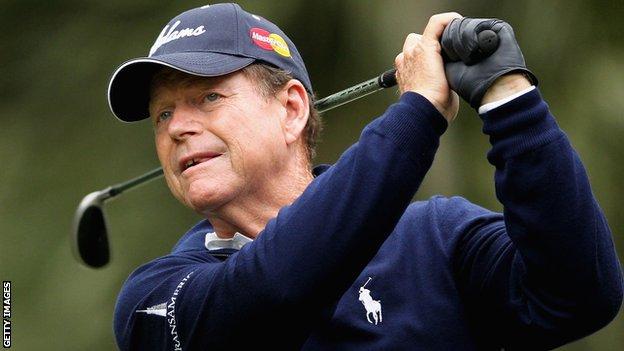 Tom Watson, the eight-time major champion, will play in Wales for the first time at this year's Senior Open Championship at Royal Porthcawl.

The 64-year-old, who won the Open Championship five times, says he will be fulfilling a lifelong ambition to play the famous Welsh links course.

"It's actually been on my bucket list to play over there before I can't play golf any more," said Watson.

"It's going to be a great pleasure to play."

By confirming his appearance in the event, held on 24-27 July, Watson joins 2010 Ryder Cup captains Colin Montgomerie and Corey Pavin, as well as past Senior Open champions Fred Couples and Bernhard Langer in the field.

Montgomerie held off a stern challenge from Watson over the weekend to clinch the US Senior PGA Championship in Michigan, Chicago.

Ian Woosnam, the 1991 Masters champion, will also be there, and Watson revealed the Welshman has been singing Porthcawl's praises as the event gets ever nearer.

"He's told me it's one of the great golf courses," Watson told BBC Wales Sport.

"I hope we get a chance to play together, that would be wonderful."

The Porthcawl course took a heavy battering during the winter storms as the near-by sea flooded many of the opening holes. A dead cod was among the debris blown on to the course and the green staff have been working hard on repairs over the past weeks.

The course, which has held The Amateur Championship on six occasions and the 1995 Walker Cup, is renowned for the quality of its greens and striking views over the Bristol Channel.

Watson, who will be chasing a fourth Senior Open victory, says it remains a thrill to play a course he has never set foot on before.

"One of the marvels of the modern age is that I've been able to see the golf course on the Royal Porthcawl website. It's got beautiful images of the course," said Watson, the five-time Open champion, who will captain the US team in September's Ryder Cup against Europe in Gleneagles, Scotland.

"I can see that most of the opening holes have out of bounds on the left so you better not be hooking the ball otherwise you'll be shooting some high numbers.

"The beauty of the course as it's laid out in front of you is magnificent. I love playing links golf now and it's going to be a pleasure to play in. I hope my game is up to the task."