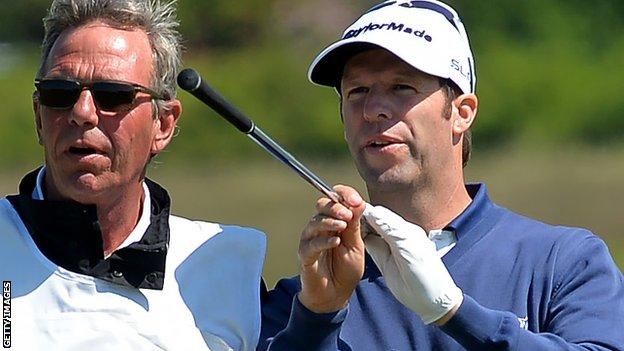 Bradley Dredges says he can see shoots of recovery after illness put his golf career on hold.

The Welshman, 40, lost his playing rights on the European Tour in 2012 and then health problems forced him to take an extended break.

But his comeback has continued at the Nordea Masters this week, where he sits a shot off the lead after two rounds.

"I've had a bit of a health problem which has put a spanner in the works," said Dredge.

"I've been playing well. I've been working on my game over the winter, so it's nice to be back playing again and I'm enjoying it."

Dredge, a two-time winner on the European Tour, failed to retain his card for the 2013 season and admitted to contemplating retirement.

He continued playing - depending on invitations to play on tour the following season - but again failed to accumulate enough money to retain his playing rights as he began to suffer health problems.

Referring to those issues as "personal problems", Dredge said they were nearly resolved and hopes to rediscover the kind of form that took into the top 50 in the world rankings in 2006.

"I had to stop playing for a while over the last year because my health wasn't too good," he said after adding a second round 70 to his opening round of 69 at the PGA Sweden National on Thursday to leave himself a shot behind leaders Victor Dubuisson, Alvaro Quiros and Eddie Pepperell.

"At the moment it's OK so we'll see how it goes. I've been trying to sort myself out and start playing again.

"I've been playing on the Evolve Tour in Spain over the winter and I've played the EuroPro just to try to stay competitive so that I'm ready when I play the main European Tour events."

This week's invitation to play the Nordea Masters came through his medical extension which allows him to play a certain amount of tournaments.

He made the field in Sweden only because a number of higher-ranked players withdrew.

Dredge has made the most of the other two outings he has secured this season, finishing tied 10th in the NH Collection Open in Spain and tied 16th in Maderia Islands Open, but knows he needs even better results to become a full-time tour member once again.

"I would like to get back to where I was, but I've got limited opportunities to play so it's not going to be easy," he said.