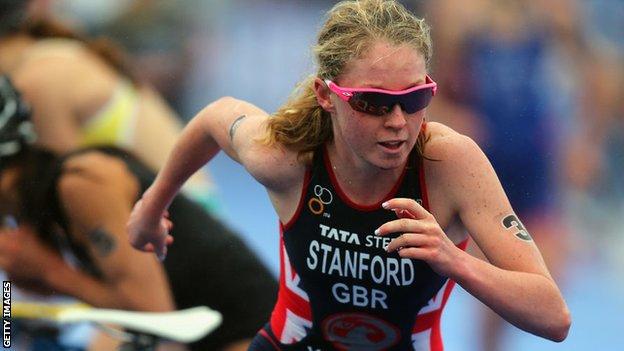 Wales triathlete Non Stanford admits her build-up for the 2014 Commonwealth Games is still being hampered by a long-term injury.

The 25-year-old injured her foot in March, ending her hopes of defending the ITU World Championships title she won in 2013.

But while her running has been affected Stanford has still been able to train normally on the bike and in the pool.

"I'm still coming back from that injury," Stanford said.

"We're really working towards being fit and ready for Glasgow and not much before that.

My mother has been involved in the Commonwealth Games in the past, so I'm really excited to go and finally represent Wales

"It's dragged on a bit longer than I'd hoped but... it's all part of the challenge and I've got the best medical team around me, the same team that got [London 2012 gold medal winner] Alistair Brownlee on his feet and ready for the Olympics.

"Hopefully we'll get it right and I'll be all guns blazing in Glasgow.

"It really limits the amount of running I can do; it's a foot injury so it does mean my running has to be very graded and we're really being cautious around it.

"But I've been able to ride and swim now for a while and I'm feeling really strong in both of them, so hopefully the running will come back quickly because I'm pretty fit anyway."

Stanford will form a strong Wales women's team with 2011 world champion Helen Jenkins and Holly Lawrence, who was preferred by the selectors to Ironman world champion Leanda Cave.

Stanford revealed that her inclusion to compete at a Commonwealth Games will fulfil one of her childhood dreams.

"It's been a life-long ambition to represent Wales at the Commonwealth Games - it came on to my radar long before the Olympics and when I was a child it was my first memory of a major sporting event," Stanford said.

"My mother has been involved in the Commonwealth Games in the past, so I'm really excited to go and finally represent Wales.

"My mum was involved in gymnastics as I was growing up and she coached the Welsh gymnasts and was one of the judges that went along as part of Team Wales to Kuala Lumpur [1998 Games].

"I can remember her going and being really excited and it'll be great now to be part of that myself."