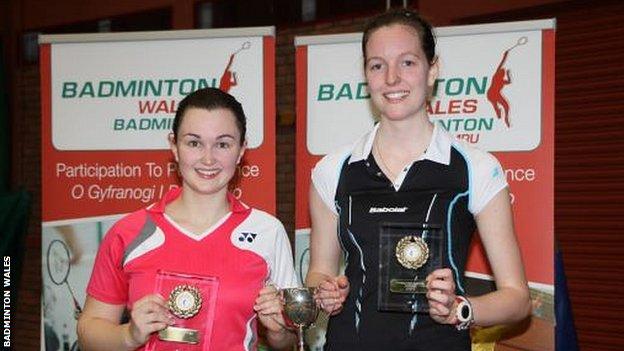 Having been crowned champions at the Iceland International and Portuguese Open, Turner and Thomas will pair up again while also competing in the singles event and the mixed doubles.

Joe Morgan, 35, will compete at his third Commonwealth Games.

Strange, 27, originally from Bangor but now living in Cardiff, will compete in the men's doubles and was crowned Welsh national doubles champion in both 2011 and 2012.

Font, 21, and Gwilt, 20, have both had a taste of competing for Wales at a multi-sport event after travelling to the Isle of Man for the Commonwealth Youth Games in 2011.

The duo also won the gold medal at the 2009 UK School Games.

Strange, Font and Gwilt will all be making their Games debuts.

Chris Jenkins, chief executive of the Commonwealth Games Council for Wales, said: "Our badminton team for Glasgow 2014 contains a mixture of youth and experience with over half of the players set to make their senior Commonwealth debuts.

"The recent successes of players such as Carissa Turner and Sarah Thomas will act as a real inspiration for the whole team and from all at Commonwealth Games Wales we wish them the best of luck."