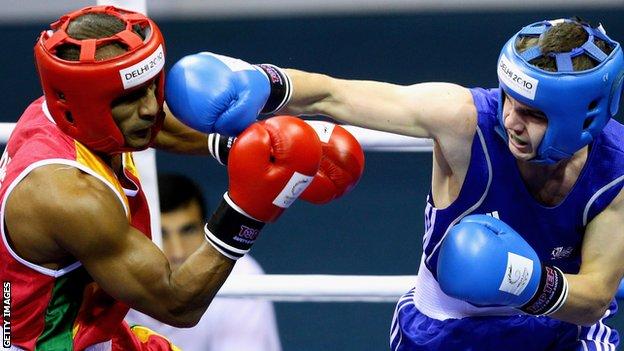 Welsh boxer Sean McGoldrick said he would love a rematch with the Sri Lankan who beat him in 2010 Commonwealth Games.

McGoldrick, 22, won silver in at Delhi 2010 Games, later upgraded to gold after his opponent in the final, Manju Wanniarachchi, failed a doping test.

The bantamweight said he would relish the chance to meet him in Glasgow.

"I'd love to fight him [Wanniarachchi] again - hopefully this time for the gold medal again."

"I'm going to do everything in my power to come away with a second gold medal and become the first Welshman to do it."

McGoldrick, from Newport, was not awarded his gold medal until almost a year after the Games after Wanniarachchi was stripped of his title and decided not to appeal against the decision.

The three-Games veteran announced his retirement after the verdict, but has since reversed his decision and was named in Sri Lanka's team to travel to Glasgow.

McGoldrick said: "There's probably more people I'd like to fight in the final than him, but if I could fight him in the final again I'd be pleased and hopefully this time it will go my way.

"He's probably holding a grudge against me, but it's not my problem he's a drug cheat.

"It's a challenge and I love a challenge. It's going to be difficult to emulate what I did four years ago, but that's boxing. There's no pressure on me to go out there and win the gold medal.

"I'm going to do everything in my power to come away with a second gold medal and become the first Welshman to do it."