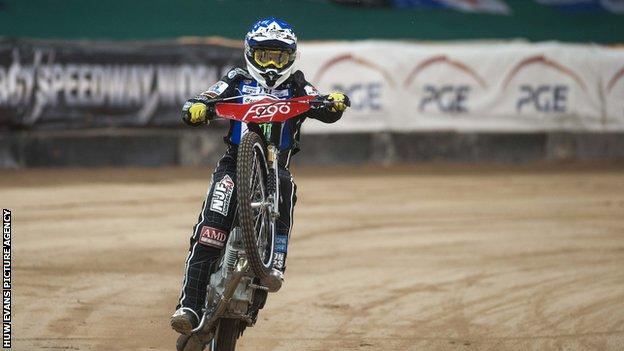 Around 50,000 fans are expected at the Millennium Stadium in Cardiff for the event on Saturday.

Going into the race, world champion Woffinden can move into top spot in the championship standings with victory.

"I think Tai will rely heavily on the crowd," said Bellamy.

"I expect him to be there or thereabouts... the atmosphere in this place [the Millennium Stadium] is fantastic and we'll have the roof closed and that should give him a couple of points advantage."

Born in Scunthorpe, Woffinden grew up in Australia but returned to England in 2006 to pursue a speedway career and went on to win the British Under-18 and Under-21 titles in successive years.

He was part of Wolverhampton Wolves' Elite League title success in 2009 and became Britain's eighth world champion at the 2013 season's final Grand Prix in Poland.

He is currently one point behind championship leader Greg Hancock after half of the 12 rounds.

Bellamy believes this year's Grand Prix in Cardiff will be close, as it is the race all the riders want to win the most.

"Of the 16 riders that will be here on Saturday night 14 have won a Grand Prix which is quite a record, so it's very, very open," said Bellamy.

"It's our big event of the year and we regularly refer to it as our Monaco [the famous stage of the Formula One world championship].

"I think the riders and the fans all believe this is the big one for them."