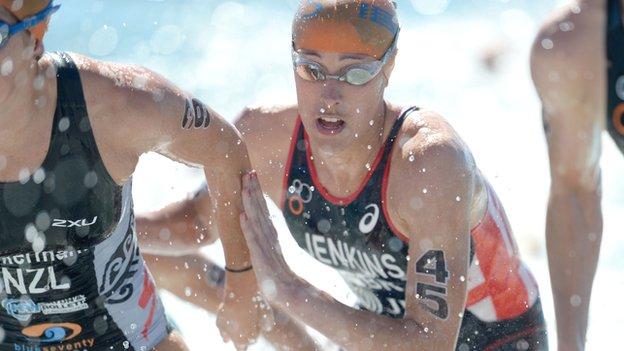 Triathlete Helen Jenkins has withdrawn from the 2014 Commonwealth Games because of a foot injury.

Wales, who have not yet named a replacement for Jenkins, have already lost Non Stanford because of an ankle fracture.

The triathlon, which takes place on the opening day of the Games in Glasgow on 24 July, had been an event in which Wales had strong medal claims.

But with both Stanford and now Jenkins sidelined through injury, their podium hopes have plummeted.

Team Wales Chef du Mission Brian Davies said: "It's undoubtedly a huge blow to the team and she'll be sorely missed, but first and foremost our thoughts are with Helen. We wish her a speedy recovery."

Jenkins, who will see a specialist this week, added: "It's almost certain that I won't be racing again this season.

"I particularly want to thank my support team who have worked so hard to get me back racing after such a difficult 18 months after the Olympics."

Triathlon Wales says it is "reviewing options" on whether to replace Jenkins, saying that any replacement will be made with "medal targets in mind".