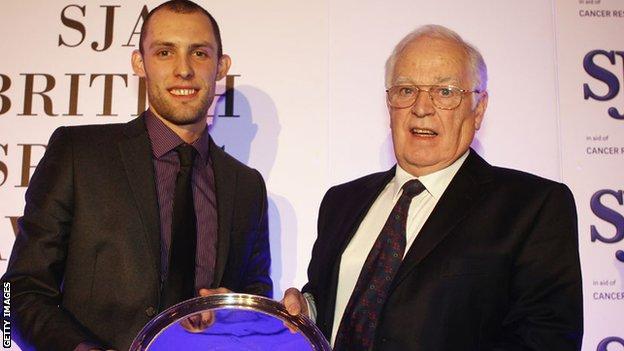 Hurdler Dai Greene is to leave his coach Malcolm Arnold after five years based at the University of Bath.

Arnold guided Greene to gold medals at the Commonwealth Games, and European and World Championships.

But the 28-year-old Welshman has been troubled by injuries since winning the world 400m hurdles title in 2011 and lost his Commonwealth crown in Glasgow.

"I could do with a change of scene so at the moment I'm in search of a new coach," Greene told Sport Wales.

"I've been in Bath for around five years and I feel that the last couple of years haven't gone my way.

"It can be a little bit depressing going to training when you're the only guy injured and training on his own.

"[I'm] getting great support form the people at British Athletics and I'm sure I'll find something in the next couple of weeks - there's plenty of things going on behind the scenes."

Greene paid tribute to Arnold who is senior performance coach for UK Athletics, and has coached a number of high-profile hurdlers in a career spanning more than 40 years.

"Malcolm and I have had a good run at things," he said.

"I've learned so much under his tutelage and if it wasn't for him I wouldn't be sitting here, I wouldn't be being interviewed [and] I wouldn't have had the medals I have won.

"So I'll be forever grateful to him for what we managed to achieve."

Greene's decision to move from the training centre at Bath follows a season that saw him miss out on selection for the European Championships and fail to reach the final of his event at Glasgow 2014.

However, he will not be completely severing ties with Arnold, who is also national event coach for hurdles in the UK.

"Malcolm is very professional and more than happy to help me in my transition period between coaches," added Greene.

"I'll be more than happy to work with him. He's been a great guy and a lot of what I've learned from training [with him], that's what I'll be putting into my new programme with whoever that is.

"It was mainly the change of location for me that was the driving factor, the need to have more people around me at an elite level, especially when I've had lots of injuries.

"It's easier to overcome them when you're surrounded by more athletes."