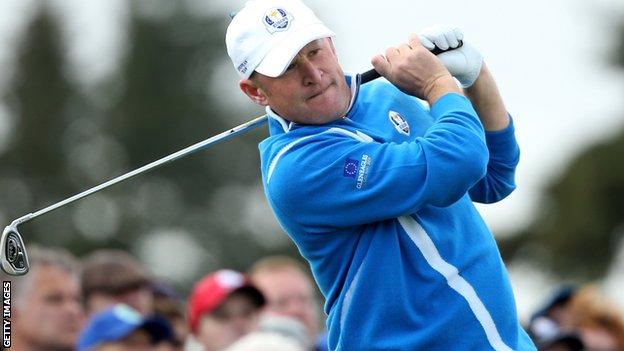 The pair beat Americans Jim Furyk and Matt Kuchar by two holes to help Paul McGinley's side into a 5-3 lead going into the second day at Gleneagles.

Europe were down 2½-1½ after the morning fourballs but won 3½ points out of four in the afternoon foursomes.

"It was an awesome experience," said Pontypridd-born Donaldson.

"We played against really quality opposition and they didn't give us one hole.

Donaldson, 38, and Westwood, playing in his ninth Ryder Cup, sat out the first session before fighting back from an early one-hole deficit in the afternoon.

The pair lost the third but were all-square with a birdie on the short sixth and stayed ahead until the end after winning the seventh with a par.

Westwood was full of praise for his playing partner: "I have as much fun playing as I do watching someone take to it like a duck to water."

Donaldson secured an automatic place on Europe's team by winning the Czech Masters, one of his three wins on the European Tour during 2014.

Despite his good form, he admits little can prepare a golfer for the tension of the Ryder Cup.

"There's so much pressure involved and it's such a big occasion, there's really nothing that can get you ready for this," said Donaldson.

"That first tee is like a sudden death play-off in a major - it feels like there's 20,000 people on one hole. It's incredible.

"It's quite surreal, it's like playing in a football stadium on every hole."

Donaldson and Westwood return to action at 07:50 on Saturday morning for the fourballs against Furyk and Hunter Mahan.

Justin Rose and Henrik Stenson were the star partnership for Europe on day one with a 5&4 fourball victory against Bubba Watson and Webb Simpson, and a 2&1 foursomes win over Mahan and Zach Johnson.

Rory McIlroy and Sergio Garcia lost their morning fourball with a narrow last-hole defeat to Phil Mickelson and Keegan Bradley, but forced a crucial half on the final hole against Rickie Fowler and US debutant Jimmy Walker.