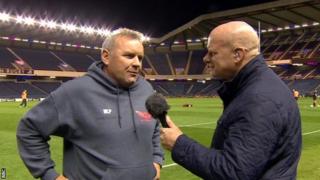 Scarlets head coach Wayne Pivac was disappointed after his team let a 14-point lead slip against Edinburgh in Murrayfield.

He told Scum V's Phil Steele that he felt his team's second half display was disorganised and that he was not impressed by the decision to run a penalty when time was up and the Scarlets had only 14 players on the field.

It led to a penalty for Edinburgh which gave fly-half Tom Heathcote a chance to clinch a win for the home team - which he failed to manage from halfway.