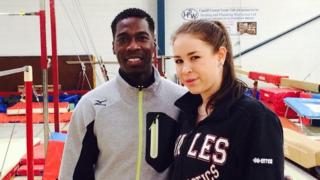 For his latest #ChallengeChristian, former Olympian Christian Malcolm is put through his paces by Commonwealth gold medallist Frankie Jones as she attempts to teach him the art of rhythmic Gymnastics.

Although he seems to learn quickly, Frankie lays down the gauntlet for his challenge making him attempt the dreaded 'Iron Cross' hold on the rings.

Did he manage to do it?

#ChallengeChristian appears on BBC Sport Wales, Friday evenings on BBC Two Wales and on iPlayer for seven days after transmission.