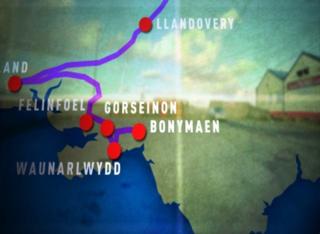 When Wales beat France 20-13 in the Six Nations last Saturday, the players came from the now common mix of Welsh regions and French and English clubs.

But what about the Welsh players' roots? Which clubs do they call home?

Sport Wales went on a road trip to visit all the clubs that produced the starting team against France.

Part one sees the journey began at a snowy Rhayader, before a trek west to Llandovery and Whitland, ending in Bonymaen, where Wales and British and Irisih Lions lock Alun Wyn Jones began his career.

Sport Wales is on BBC Two Wales every Friday at 19:00 GMT and on the iPlayer for seven days after transmission.