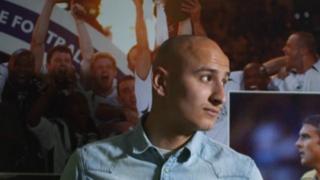 With his old club Liverpool on the horizon on Monday night, Swansea City midfielder Jonjo Shelvey spoke to BBC Sport.

Shelvey moved from Liverpool for £5m in 2013 and has been a key part of Swansea City's midfield since joining. He has scored eight goals in 66 appearances.

You can listen to commentary of Swansea City against Liverpool on Monday night on BBC Radio Wales Sport and Radio Cymru.

Sport Wales is on BBC Two Wales every Friday at 19:00 GMT and on the iPlayer for seven days after transmission.