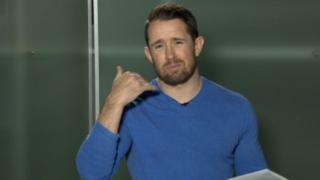 Cardiff Blues prop Jones quit international rugby after missing out on selection for the 2015 Six Nations.

However, following an injury to first-choice tight-head Samson Lee, former Wales wing Williams has urged the coach to "swallow his pride" and turn to the prop, who won 95 Wales caps.

There's more from Shane Williams on this Friday's Sport Wales on BBC Two Wales at 20:00 GMT and on the iPlayer for seven days after transmission.