Thirty-nine horses will line up for the 168th running of the Crabbies Grand National, racing reporter Aly Rowell outlines the Welsh interest in the race.

Looking to become the third horse to win both the Scottish & Aintree Grand Nationals.

The horse could follow in the hoof prints of Red Rum and Earth Summitt by winning both the Scottish and Aintree Grand Nationals.

Bowen, who trains in Haverfordwest will also be keeping one eye on his jockey son, Sean, who will have his first ride around the famous course.

Denis O'Regan, who finished second on Black Apalachi five years ago when AP McCoy won the race on Don't Push It will instead ride Al Co.

Welsh jockey Sam Twiston-Davies will be aboard Rocky Creek and it would be some consolation for the jockey if he won the race after having to miss the winning ride 12 months ago.

When he was 17, Twiston-Davies finished fifth in his first Grand National in 2010 on Hello Bud.

Now 21, he's been tipped as a future champion and wasn't born when AP McCoy rode his first winner in 1992. 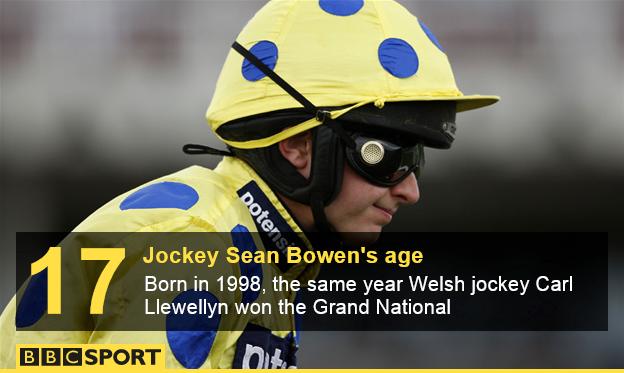 Ridden by the youngest jockey in the race, Sean Bowen at 17 years old.

Sean Bowen is the youngest jockey in this year's race and was born into a racing family. His father Peter saddles Al Co whilst his 19-year-old brother Micky trained Bob's Law to finish seventh in Thursday's Foxhunters Chase over the Grand National fences.

He won the Welsh National in January 2013 for owners including rugby union players Mike Tindall, James Simpson-Daniel and Nicky Robinson.

Former Wales fly-half Robinson has not been named in Bristol's team to play Plymouth on Saturday so will be free to head to Aintree to watch what the owners call 'The Dude' run in the big race. He'll be ridden by Liam Treadwell who was victorious on board 100-1 winner Mon Mome in 2009.

Pembrokeshire trainer Rebecca Curtis finished third with Teaforthree two years ago and is seeking to become the fourth woman to saddle the winner in the shape of West Wales National winner Bob Ford.

The horse will be ridden by former Irish Champion Jockey Paul Townend, who is second to stable jockey Ruby Walsh at the powerful Willie Mullins yard.