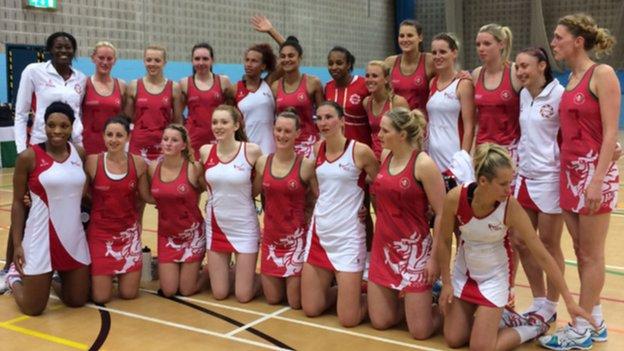 Wales netball chief Trish Wilcox was positive in spite of a 65-31 defeat by England in a World Cup warm-up match in Merthyr.

Third-ranked England were too strong for the Welsh, and led from start to finish.

But head of elite performance Wilcox was happy with aspects of the Welsh performance.

"I'm pleased with parts of our performance and it's not a bad place to be," she said.

Wales travel to a holding camp in Tasmania later in July before meeting Fiji in the their opening game of the World Cup in Sydney on 7 August.

The Welsh have further friendly matches against Scotland, an Australian Institute of Sport side and Tassie Spirit before the tournament.

"This is our first hit out on the road to the World Cup in Sydney," added Wilcox.

"The main focus was to give all 12 squad members some valuable game time and it was lovely to get everyone onto the court which gives them all a boost and to play against one of the top three countries, they'll just learn and grow from there."

Eighth-ranked Wales have been drawn in Pool D at the World Cup, and will face Uganda and Zambia as well as Fiji, who are ranked seventh in the world.