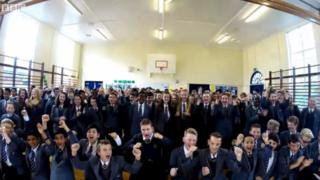 It's a huge Saturday for Wales' rugby union and football teams and two of Whitchurch High School's former pupils will play a pivotal role in the games.

Sam Warburton will lead out the rugby team against Australia at Twickenham in the Rugby World Cup (16:45 BST), while Gareth Bale and his football team-mates hope to secure a point in Bosnia-Herzegovina (19:45 BST) which would secure qualification for Euro 2016.

Tune into ‪Sport Wales‬ from 20:00 BST on Friday on BBC Two Wales as year nine pupils Angel and Morgan present a special preview show. Can Wales beat Australia? Can Bale and co qualify for Euro 2016?