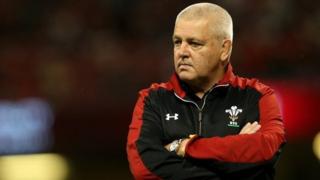 'James had to escape goldfish bowl'

Cardiff Blues' James, 28, will start in Wales' opening Six Nations game against Ireland on Sunday, almost six years after the last of his 10 caps.

James walked out on the Wales squad after not being selected for a Six Nations game against Italy, but Gatland says the player has "grown up."