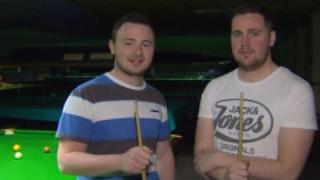 Welshman Duane Jones believes he can beat world number one Mark Selby at snooker's Welsh Open, which starts in Cardiff on Monday.

Jones, 22, is ranked 118th in the world but thinks his chances of an upset are enhanced with the match being the best of seven frames.

"Mark is one of the best players to ever pick up a cue, but I genuinely believe that on my day I can win," said Jones, who faces Selby on Monday.

In this video, Jones also tells BBC Wales Sport's Gareth Blainey about his friendship with another countryman in the tournament, Gareth Allen.

The 27-year old-from Ewloe Green on Deeside, ranked 107 in the world, will take on world number 39 Mark Joyce on Monday.