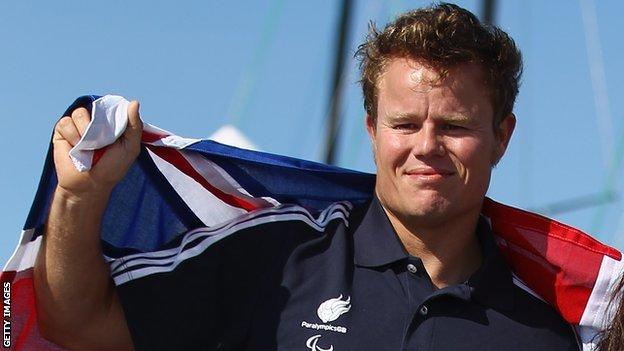 Welsh Paralympic sailor Steve Thomas says he and his Sonar class crew-mates have found the waters at Rio not as bad as portrayed in the media.

Thomas, John Robertson and Hannah Stodel have been named to represent GB at their fourth Games.

"Actually, we've found it quite clean compared to some of the reports in the press," said Thomas.

However, he says debris including trees should be cleared from Guanabara Bay where sailing takes place in September.

"Recently they've had a lot of rainfall which has managed to wash a lot of the debris off the land into the water and it has made for some tricky sailing conditions," added Thomas.

"We've seen trees, plastic and all kinds of paraphernalia in the water.

"But for me, I'd quite like to urge the politicians and the IOC [International Olympic Committee] to try and help clean the waters up, not just for the sailing event because it is the pinnacle of everyone's sailing career, but also just for the local population so that they're able to go out and swim in that water because currently it's not swimmable."

Thomas and his crewmates won the 2015 world title and have succeeded at European level.

But Olympic podium finishes have evaded them, including controversially at London 2012, where they finished fifth, having been sixth in Bejing in 2008.

However, he is confident as the build up to the Games continues.

"We won the worlds in 2015, but the standards are always increasing," said Thomas

"There's probably six or seven boats that could win a medal at the Games and we want to be at the top of the pack."

Away from sailing, Thomas says he and his fellow competitors can expect good memories from the Games based on his own recent experiences.

He said: "We've been out in Rio a few times.

"I was in a wheelchair pushing down this street, just to give an example, and a bus just stopped on the side of the road and basically put down his disabled ramp at the front of the cab and basically offered me a lift into the bus.

"So the people there are fantastic and I'm sure they will embrace the Paralympics and I can only see a positive effect for disabled people within Rio after the Paralympics."

"It was full contact, no holds barred with the same skill elements (as able-bodied ice hockey)," said Thomas.