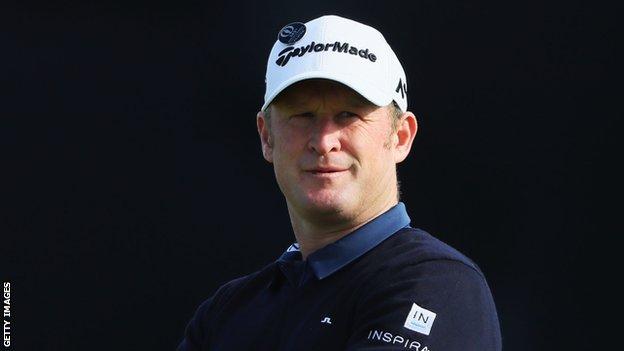 Jamie Donaldson says he is targeting his highest placed finish at The Open Championship ahead of his final round at Royal Troon on Sunday.

The Welshman is five over par after a third round 76 saw him slip down the leaderboard.

Donaldson's best performance at The Open came in 2013 at Muirfield when he finished joint 32nd.

"If I beat that then it's an improvement," the 40-year-old told BBC Wales Sport.

"You never know, if I have a nice draw with no wind in the morning I could shoot five under and post a score for my own personal satisfaction and nothing else."

Four bogies on the back nine on Saturday left the world number 79 ruing missed putts.

"Overall the course today was playable and I played okay, but didn't putt great," he said.

"I kept three-putting and the holes are tough enough as it is,

"You don't need to knock it on the green in two and keep three-putting.

"I just couldn't get the speed of the greens."

Despite slipping out of contention, Donaldson, who had missed the cut in his previous four competitions, is overall happy with his performance so far at Troon.

"I've not played great of late, struggling with coming back and forth from America. Not playing my best golf," he added.

"To start showing signs of good golf again is a good thing so hopefully I can shoot a good score tomorrow and take it into the PGA."