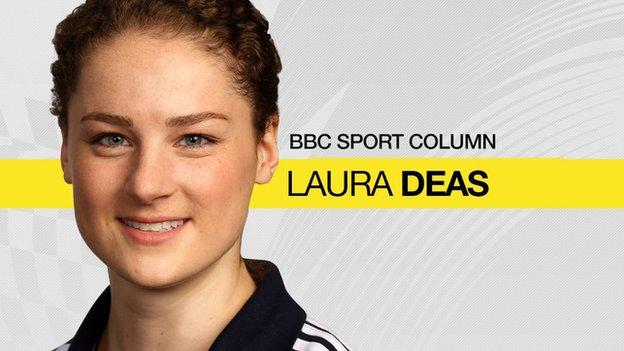 I'm currently in Konigssee, Germany, venue of the World Championships, which I will be competing in at the weekend.

It is a really big honour to be named in the squad. Although I've been doing this sport for quite a while now, getting in a team like this is never something that you can take for granted.

Konigssee is the oldest refrigerated ice track in the world and is set in the heart of Bavaria at the side of a beautiful lake.

However, don't let the idyllic setting lull you into thinking this is an easy track, it's not!

It's short, with a few unique corners including another big right-handed kreisel (a 360 degree corner), and a sequence of four highly banked sweeping curves apparently called the 'snake pit' in German.

Those, along with a long uphill section towards the finish line make this a track where any mistake will really punish your finish time and sometimes your body too, as I have discovered in the past!

It wasn't originally the venue for the World Championships this year, the original plan was that they would take place in Sochi, venue of the previous Winter Olympics in 2014.

However, following the publication of the McLaren Report, the decision was made by the IBSF to move the Championships to Germany.

I think it was absolutely the right decision in the current circumstances, and this is obviously great news for the German team, as it means they will have hosted two World Championships in the last three years.

That said, I will be doing my best to put the pressure on the home-track sliders this weekend when the competition gets underway.

A little while ago I said that I thought I was due some luck in Konigssee, and I think that's still the case given the World Cup here didn't go all that well a couple of weeks ago.

I didn't make any huge errors, but a few untidy lines cost me a lot of time so I'll be looking to improve on those when I get back on the ice.

My aim is to win a medal. In terms of results, this year has been tough for me. I feel I've been sliding well but it hasn't translated into medals on race days as often as I'd like.

Having said that, in some ways I have been very consistent, finishing in the top 10 in every race but one, so I know that I'm close to where I need to be.

A lot of what we have been working on this year has been about building towards next year and obviously the Winter Olympics.

After the World Championships we have a test event where the Winter Olympics will be staged and that will form a massively important part of my preparations for 2018.

So, although the Worlds is the pinnacle of the season, I think it's fair to say that everyone has an eye on doing well in Pyeongchang and laying down a marker for next year.

Everyone is excited to get out there onto the track and see how they get on with it, and if it suits their style of sliding.

Until you do, all the planning for the Olympics is theory, but once you've slid the track and been out in the environment, it starts to become real.

I expect it will feel surreal at first out there knowing that that will be the very ice that the Olympics will be contested on, but once training starts my focus and energy will be on learning the track.

There will be lots to take in in a short space of time so I'm expecting it to be intense and challenging, as most races take place on tracks that have been in existence for a long time, it always throws in a different dynamic to the international circuit when a new track is built.

It will also be my first ever trip to Asia... so my inner tourist is excited too.