Medical student Oliva reached the final via a repechage and after trailing early in the final, powered towards the front to finish behind Australia's Matt Glaetzer with New Zealand's Edward Dawkins taking bronze.

Ciara Horne, Hayley Jones and Jessica Roberts missed out on the women's medal races in the 3,000m individual pursuit, along with Ethan Vernon and Sam Harrison in the 4,000m men's event, while Rachel James and Ellie Coster bowed out of the sprint at the last 16 stage.

But there were personal bests across the board for the Welsh track cyclists.

Hursey lost her singles rubber 3-2 but bounced back immediately to win the doubles with Thomas.

Carey brought Wales back, but lost her final game against Miao Miao.

Two singles victories from Carey had sealed the win against Sri Lanka, but Australia proved too strong. 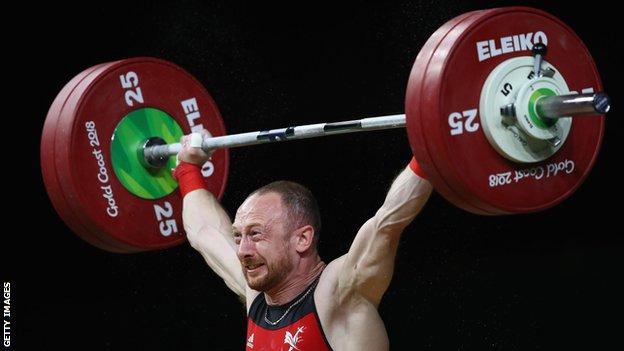 Evans won Wales' first gold of the Games in the men's -69kg category.

Jones is the youngest weightlifter in this Commonwealth competition.

In the pool Alys Thomas missed out on bronze as she finished fourth in the women's 100m butterfly final as Charlotte Atkinson of the Isle of Man took third place.

Also in the pool Xavier Castelli was fifth in the 100m backstroke final.

British champion Tesni Evans is through to the women's squash singles quarter-final after defeating Aifa Azman 3-1, while Joel Makin reached the last eight of the men's competition by defeating Jamaica's Chris Binnie 3-0.

Rosie Eccles is through to the quarter finals of the 69kg boxing division after beating Cameroon's Aubiege Azangu 4-1 but Kyran Jones lost by the same score to Northern Ireland's Steven Donnelly.

Welsh bowls player Laura Daniels beats Jersey's Rachel Macdonald 21-11 in the women's singles, while the men's triples beat Papa New Guinea 27-10 to remain top of their group. Both play for a semi-final spot on Saturday.

The mixed B2/B3 pairs were victorious 13-7 over Scotland, while the women's fours lost against Scotland 22-10.

In the open B6/B7/B8 triples section, Wales were defeated 27-4 by Scotland but in the men's pairs, Daniel Salmon and Marc Wyatt beat Jamaica 33-4.

Wales' netballers lost 70-44 to New Zealand while the women's hockey lost England 5-1 on Friday after their shock win against India.

Natasha Marke-Jones scored with just three minutes left to secure a dramatic 3-2 win for Wales on the opening day, but they were no match for England.

Maisie Methuen and Latalia Bevan are through to the individual all-around final on Saturday, while Holly Jones will compete in the vault final on Sunday.

Methuen and Bevan also qualified for both the uneven bars and beam finals, with Bevan and Emily Thomas also progressing in the floor final.