Cyclist Geraint Thomas is the BBC Cymru Wales Sports Personality of the Year for 2018, winning the award for the second time after topping the vote in 2014.

This year the 32-year-old became the first Welshman, and just the third Briton, to win road cycling's biggest prize the Tour de France.

"It's massive [the award], it's something I always grew up watching when I was younger," Thomas told BBC Sport Wales.

"Just to be nominated shows you've done something special in the year, so to win it and have everyone vote for me is really nice, and it's a lovely way to finish off the year."

Snooker player Mark Williams was second having claimed the World Championship for the third time, 15 years after his last success, with Laura Deas third after her bronze in the skeleton made her Wales' first Winter Olympics medallist.

Cardiff Devils were named Team of the Year after lifting ice hockey's Elite League title and being crowned Play-off champions.

Coach of the Year went to Jayne Ludlow, after she led Wales to within a whisker of qualifying for the 2019 Fifa Women's World Cup.

The Lifetime Achievement award went to Baroness Tanni Grey-Thompson, one of the finest track para-athletes of all time who won 11 gold medals over five Paralympic Games - 16 medals in all - and two World Championships during her career.

Results of the public vote were revealed at the Wales Sport Awards at the Celtic Manor Resort in Newport on Tuesday night, where BBC Cymru Wales and Sport Wales celebrated Welsh sporting success. 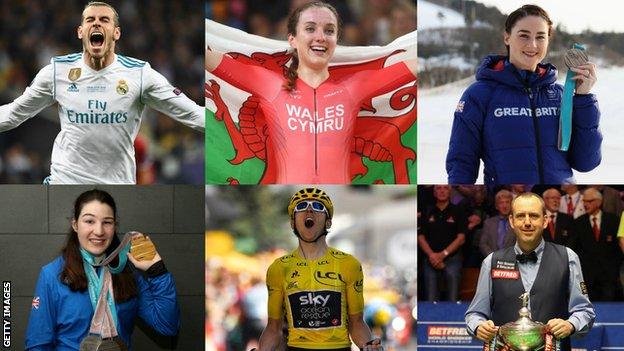 Other awards which were given on the night included: