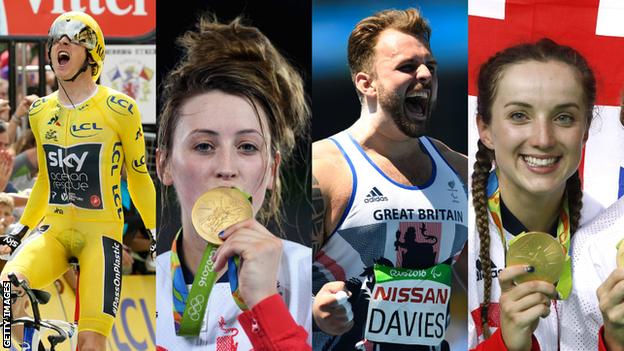 BBC Sport Wales takes a look at the best and worst moments of Welsh sport in the past decade.

It has been a decade with extreme highs and lows with historic footballing and rugby success, while individuals such as Geraint Thomas, Gareth Bale and Jade Jones made history.

However, 2010-19 was also a decade where a nation grieved the loss of one of their greatest, Gary Speed and Wales' rugby team twice came close to achieving the ultimate glory at the Rugby World Cup only to fall short.

Let's cast our minds back and focus on the best and worst of Welsh sport this decade.

You can read our reviews of football and rugby of the last decade. Here we look at some of the highs and lows in other sports.

2010 to 2019 was a golden decade with Welsh riders delivering more Olympic medals per head of population than almost any other country whilst Geraint Thomas brought home the Tour de France's famed maillot jaune.

Thomas was amongst the British Olympic Track champions at London 2012 which effectively brought down the curtain on the illustrious career of women's Tour de France winner Nicole Cooke.

In 2013 she stunned the world with a 20 minute retirement speech that exposed every aspect of corruption in professional cycling, from doping to gender inequality.

In the same year Becky James became a World Track Champion, as did Elinor Barker who went on to add further World, Olympic, European and Commonwealth titles to her ever expanding trophy cabinet. The 25-year-old from Cardiff ends the decade already with 24 major medals in her collection.

It was another product of the city's Maindy Flyers club that took the sport's most revered prize.

Having started his career as a track rider who then earned himself a reputation amongst the best one-day road racers, Thomas made another transformation to win the World's biggest bike race in 2018.

Having triumphed in June's Critérium du Dauphiné he started the Tour de France in July as joint Team Sky leader alongside Chris Froome.

Victory on the steep final ascent of stage 11 catapulted him into the race lead and Thomas won again the following day at the top of the fabled Alpe D'Huez.

He rode strongly in the Pyrenees and time trial over the final week to became the first Welsh man to win any 'Grand Tour' and was welcomed back home by thousands on the streets of Cardiff and won BBC Sports Personality of the Year to crown a remarkable 2018.

A year later Thomas was runner up in the 2019 Tour de France.

The first half of the decade was a frustrating 'nearly-but-not-quite' period for the once dominant Cardiff Devils. They were cup or play-off runners-up in 2010, 2011 & 2012 before winning the Challenge Cup in 2015.

A decade that ended with trailblazing athlete Baroness Tanni Grey Thompson honoured with the Lifetime Achievement award at the BBC's Sports Personality of the Year was marked by conspicuous success for Welsh athletes in disability sports events around the world.

Success in Pyeongchang in 2018 means Menna Fitzpatrick - along with sighted guide Jennifer Kehoe - is Britain's most successful Winter Paralympian.

The 21-year-old - who has 5% vision - won one gold, two silvers and a bronze to add to the two gold medals she won at the World Para Alpine Skiing Championships.

At the Paralympics, Aled Sion Davies took gold medals in the F42 discus in 2012 and F42 shot put in 2016. There were also golds for cyclist Mark Colbourne and F51 discus thrower Josie Pearson in London.

Golden era for Wales at the Olympics

There were more Welsh gold medallists in this decade than any other in the history of the modern games, with a total of seven won in London and Rio.

For context, there were no Welsh gold medallists at the Games between Richard Meade in 1972 and Nicole Cooke in 2008 - 36 barren years.

In total there were 18 medal-winning displays - either as part of teams or individually - by Welsh competitors at the 2012 and 2016 Games.

Jade Jones' two individual golds put her at the head of a talented generation - especially when you consider her 2019 World title and numerous Grand Prix and European crowns. Jones' latest honour came from the Queen, who made her an OBE in the New Year's Honours List.

Laura Deas made history in 2018 when she became the first Welsh athlete to win a medal at the Winter Olympics, taking a bronze behind British gold-medallist Lizzy Yarnold in the skeleton at the Games in Pyong Chang.

Bruce Tasker - a member of the British four-man bob team at Sochi in 2014 - had to wait until 2019 before he too became a bronze medallist, as the British team was promoted to third after two Russian teams were disqualified for doping offences.

Tasker was planning to compete at the 2018 Games but suffered a stroke in January that year and subsequently retired from the sport.

World title wins for the pros and amateurs

After the previous decade where Welsh boxing's dominance came courtesy of the famed Team Calzaghe stable, success proved more modest in this decade, albeit more varied and with Wales shining in both the paid and amateur ranks.

Indeed, you could even argue this was a decade where the amateurs outshone the pros with Lauren Price in particular enjoying unprecedented success.

Price became the first Welsh boxer to win gold at the World Championships, adding to her first place finishes at the Commonwealth Games and European Championships. She will look to complete the set with Olympic gold in 2020, hoping to go one better than 2012 silver medallist Fred Evans.

In the paid ranks, Wales was able to celebrate their 11th and 12th world champions as Nathan Cleverly and Lee Selby added their names to the illustrious list.

Cleverly was WBO light-heavyweight champion from 2011 to 2013 until he lost to the destructive Sergey Kovalev, while Selby held the IBF featherweight title before losing a stadium fight against domestic rival Josh Warrington.

Selby ends the decade gunning for world honours again, along with his brother Andrew, while the likes of Jay Harris and Liam Williams are looking to add world title honours to their increasingly glittering CVs.

Cardiff also continued to shine as one of boxing's most important cities, with unified heavyweight champion Anthony Joshua finding the Principality Stadium to be his "boxing home," with sell-out fights illuminating the Welsh capital in 2017 and 2018.

Success and Olympic heartbreak for Non

Triathlete Non Stanford claimed two world titles in the decade - the under-23 crown in 2012 and the ITU World title at the first attempt in 2013. In doing so she became the first athlete to win the titles in consecutive years.

Since then Stanford has struggled with recurring injuries and loss of form, though she was fit enough to qualify for the Rio Olympics in 2016 where she missed out on a bronze medal when she was beaten into fourth place by teammate Vicky Holland.

In 2019 she left the elite Brownlee Centre in Leeds to team up with a group elite triathletes under coach Joel Filliol.

Stanford continued a tradition of Welsh success started by Leanda Cave when she won the world title in 2002 and continued by Helen Jenkins.

Jenkins won her first ITU world series title in 2008 and was crowned champion again in 2011 when she was also part of the winning British line up in the team event.

Cave switched to longer distances and won the half ironman and ironman world titles in 2012.

Success came at both ends of the age scale for Welsh snooker players.

Having quipped before his semi-final that he would attend a media conference naked if he won the World Championship again, Mark Williams promptly beat John Higgins 18-16 to claim the 2018 title - 15 years after his previous success in the game's most prestigious tournament.

At the age of 43 he was the oldest winner since fellow Welshman Ray Reardon - who was 45 when he won his last title in 1978.

Never bashful, Williams promptly stripped for his conference with a bemused and amused media pack.

At the other end of the age scale Jackson Page was 15 and had to take time off school to compete in the last 32 of the Welsh Open in 2017.

Two years later he has still not broken into the top 100 ranking players in the world. But victory in the European Under-21 championship suggests he might be one of the stars of the next decade.

Hosting the Ryder Cup... and then winning it!

This has largely been a decade to forget in terms of Welsh golfing success, but Wales certainly played its part when it came to the spectacle of the Ryder Cup.

Newport hosted the event in 2010 at the Celtic Manor and despite or perhaps because of the torrential and oh-so-predictable rain forcing the event into a fourth day, an unprecedented occurrence, by the end of the tournament few golf fans could argue it had been one of the most dramatic Ryder Cup's in history.

Having taken a three point lead into the singles matches Europe faced a U.S. fight back with the contest going down to the wire and the anchor singles match between Graeme McDowell and Hunter Mahan. McDowell's victory edged Europe home 14.5-13.5.

A Welshman also played a key role in Europe's defence of their 2012 title at the 2014 Ryder Cup at Gleneagles.

Jamie Donaldson was a rookie in the event but he took to it like a duck to water, winning three points from three in the paired events before the Sunday singles where he not only triumphed over Keegan Bradley; but also hit the winning shot.

There was tragedy for Welsh cricket when batsman Tom Maynard died in June 2012, aged 23 after being struck by a train.

On the field, it has been an unsuccessful decade for Glamorgan with only a T20 finals day in 2017 and a Lords losing final in 2013 which ended up being Simon Jones' final match before retirement.

Off the field, Cardiff hosted a second Ashes Test in 2015 which England won. Sophia Gardens also staged four matches in the 2019 World Cup as well as Champions Trophy games in 2013 and 2017.

The ground has also won the franchise to be one of the eight sides to feature in The Hundred competition with the Welsh Fire in action next year.

Read:England's Test team of the decade, as chosen by you