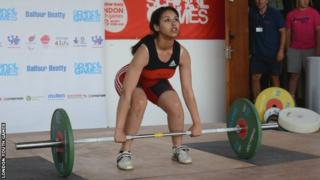 Yana Smith is hoping to follow in the footsteps of her Commonwealth bronze medal-winning sister Zoe after making her weightlifting debut at the London Youth Games.

Yana, 16, who lifted a personal best total of 70kg and finished 14th out of the 19 competitors, is three years younger than her sister, who competed for Team GB at last year's London Olympics.

She admits that qualification for the 2014 Glasgow Commonwealth Games is not a realistic target at the moment but that she is looking forward to training more regularly with Zoe's old coach Andy Callard.