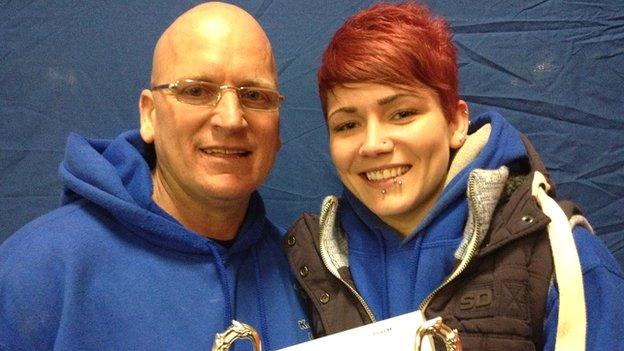 Her coach calls her "phenomenal", her nutritionist "quite remarkable".

What, then, is so special about weightlifter Georgi Black?

The 24-year-old from Kilmarnock is certainly in the "ones to watch" category for this summer's Commonwealth Games in Glasgow.

By dropping a bodyweight division, from 69kg to 63kg, she has improved her chances of a place on the podium.

Her goal is to follow in the footsteps of Delhi silver medal winner and clubmate Peter Kirkbride.

At the Scottish Open in Glasgow at the end of February she lifted a combined weight of 176kg for the two disciplines - the clean and jerk and the snatch.

It's the kind of stuff that makes world-class performance; it's not the sort of thing the average person can do

This was only 6kg short of her best combined lift when she weighed 6kg more.

Kilmarnock Amateur Weightlifting Club had 14 lifters at that event and Chick Hamilton's club will be well represented again at the Commonwealth Trials in Glasgow's west end on Saturday.

After that, there remains only the British Senior Weightlifting Championships at the Ricoh Arena in Coventry on 10 May for the Scottish athletes to make the Commonwealth Games standard.

At her heaviest, more than two years ago, Black was 78.6kg but would normally sit at 71kg and shed a few kilos as tournaments approached to compete in the 69kg class.

This weekend she expects to be 62.8kg, having lost a fifth of her bodyweight from her heaviest point.

"Making the cut in weight has been really hard," said her coach Hamilton. "She's been on only 750 calories a day.

"The commitment to that, and lifting just below her best lifts at the bodyweight above, is phenomenal. Everybody kept doubting us.

"We take our hats off to Nikos (Jakubiak), at the Institute of Sport. With his input, keeping Georgi intact, we got there in the end."

Black told BBC Scotland: "It took me two years to lose body fat and not strength. Me, Chick and Nikos worked together.

"I was 6kg below my best combined total at the Scottish Open and I had lost 6kg in body weight so you can't beat that."

Maintaining power while losing body weight takes us into the realm of sports science.

Jakubiak is the performance nutritionist at the sportscotland Institute of Sport. The Greek, who has lived in Scotland for 16 years, specialises in working with athletes from what he calls "weight-making sports" such as judo, boxing and weightlifting.

"What Georgi has achieved is quite remarkable," he said. "It's worthy of a lot of praise. The effort she has put in is quite incredible.

"It's the kind of stuff that makes world-class performance; it's not the sort of thing the average person can do. Dropping the weight is not the challenge - it's staying healthy and strong."

Jakubiak argues that "every calorie must come with goodness". He extols the benefits of porridge for breakfast and advises athletes to eat a balanced diet that provide iron, vitamin C, magnesium and the like.

His work with Black was carefully planned. He monitored her weight and power outputs every week.

He continued: "She's a special girl. She has that tunnel vision to be a world-class performer.

"The people who do this have very high goals. You are going against your own brain. You want to enjoy food.

"We set realistic targets about weight and advise on food choice, training, eating, sleeping and food behaviour. It's common sense."

Hamilton adapted Black's training programme to move away from high repetitions. In the lead-up to the Scottish Open she worked at 80-85% of her potential power and practised only single lifts.

The plan worked - she surpassed the Commonwealth Games qualifying standard by 21kg and broke seven Scottish records at her new bodyweight.

"We always said if she could do the same total at the lower bodyweight she'd maybe push for fifth or sixth in the Commonwealth rankings and if there were a couple of slip-ups she could maybe be in contention for a medal," said Hamilton.

"People say a gold medal's the be-all-and-end-all. When you look at Peter Kirkbride at Delhi, people say he lost out by 1kg but he didn't really, he won silver.

It's knowing when to push and when to take our foot off the pedal. That gets results at Kilmarnock Weightlifting Club

"For weightlifting in Scotland it was unbelievable."

Black describes the Kilmarnock club as being "like a family". Some nights she coaches 25 youths in the development programme. The club had 14 lifters at the Scottish Schools Championships where they won 12 golds, a silver and a bronze.

"It's all about hard work. People just see the end result," continued Hamilton, who represented Scotland in weightlifting at the 1994 Commonwealth Games 20 years ago.

"They don't see what Georgi and Peter have gone through over the years to become a Games athlete.

"It's hard to go to the gym to do weightlifting every day. You've got to have a bit of banter.

"As a coach, it's knowing when to push and when to take our foot off the pedal. That gets results at Kilmarnock Weightlifting Club.

The Scotland team can comprise a maximum of eight men and seven women.

The lifters in Glasgow this weekend are approaching the last-chance saloon for Commonwealth qualification. They must lift the qualifying totals at two separate events.

Black's target is way beyond the 155kg that would guarantee her place. It's pushing for a medal at Glasgow 2014.