The world's most secretive state has something to tell you. It involves global domination.

The next part of the plan will be carried out in the backyard of their sworn enemy, the United States.

Supreme Leader Kim Jong-un has declared his intention to turn North Korea into a sporting powerhouse "within a few years". It is already happening in weightlifting.

At last year's World Championships in Kazakhstan, North Korea topped the medal table at a major championships for the first time.

They are expected to repeat the trick at the 2015 competition in Houston, which begins on Friday.

In addition to their medal success, the notoriously closed nation will begin another bid to host a World Championships following an unsuccessful attempt this year.

For a country known for its unwillingness to engage with the outside world, it is a remarkable about-turn. 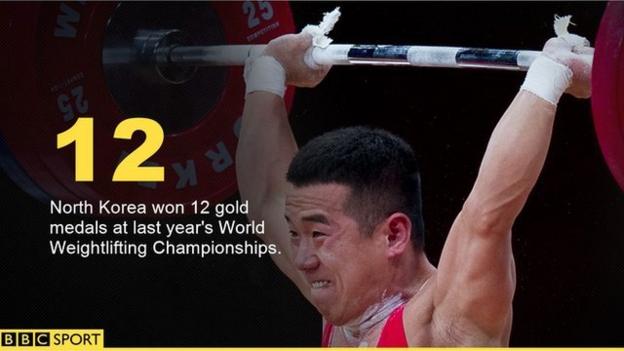 So why do North Koreans excel at weightlifting? The basic answer is genetics.

"They look like what you would want a weightlifter to look like," says British Weightlifting performance director Tommy Yule.

"Short arms, long back and short legs - kind of the opposite of the body shape you would want for a sprinter or a discus thrower. The Chinese and the North Korean lifters have the ideal body dimensions to excel."

That's particularly true of the lower weight categories in which the bulk of North Korea's 12 gold medals at last year's World Championships - and three London 2012 Olympic titles - were won.

Om Yun-Chol is a case in point. Standing 5ft tall, the 23-year-old competes in the lightest men's category, bantamweight (56kg).

At London 2012 and at last year's World Championships he lifted more than three times his own bodyweight en route to winning gold and setting a new world record.

Would the North Korean approach work in Britain?

Unsurprisingly, the exact training methods of the North Koreans are unclear.

As far as the British team understand it, their North Korean rivals spend much of the year in centralised training camps, as part of Jong-un's increased promotion of sport since taking over from his father in December 2011, which includes the establishment of a State Physical Culture and Sports Guidance Commission.

They eat, sleep and breathe weightlifting. It is survival of the fittest and those who cannot keep up are discarded.

It is a system British lifter Zoe Smith can see the benefits of - but not one she believes could work in western society.

"Training and doing everything as a team - that is my understanding of it," Smith says.

"The GB team is working towards being more centralised in that way but not being a dictatorship like that.

"I do enjoy my weightlifting but it is not something I could dedicate every single day of the rest of my life too. They just don't know any different.

"We grow up in a society when we have got rights and to have them taken away would be not very nice."

But there are still many secrets

China are also successful. They won nine gold medals at last year's World Championships and five at London 2012, and the country has been a 'closed' society.

But, according to Yule, North Korea take it to a different level.

"You can pick up news reports about Chinese weightlifting and there are some seminars from Chinese coaches that are translated," he says.

"But we have no idea about North Korea. I have not spoken to anyone in the North Korean team at a World Championships."

While Smith says the eastern European coaches routinely get violent with their charges in their efforts to prepare them for competition, according to Yule the North Korean methods are calmer, structured and always completed as a collective.

The dark cloud of doping

Inevitably, secrecy invites suspicion - especially as access to North Korea is, as Yule puts it, not a case of "turn up at the border and get your passport stamped".

International Weightlifting Federation (IWF) director general Attila Adamfi acknowledges "travel is not so easy" but says the IWF "regularly go there and test", including out-of-competition testing.

Adamfi says North Korean athletes must use the 'whereabouts' system - a system in which athletes have to make themselves available to be randomly tested for one hour a day, 365 days a year - like any other international weightlifter.

He points to a failed out-of-competition test this year by North Korean weightlifterRi Hyon Hwa as evidence the system works.

Yule says the viability of the whereabouts system in a country which requires a visa is a worry.

"That is something that is talked about in the sport," he says. "If you can't access the athlete then how do you know what's happening?"

Smith also voices concerns, although her scepticism is not specific to a nation.

"If North Korea are doping I wouldn't be surprised but you just don't know," she said.

"I don't want to vilify North Korea because there is probably doping going on in other countries. Culturally we think of North Korea as being very secretive about what they are doing but you just don't know."

Smith has a point. Ri is the only one of the 25 weightlifters sanctioned for doping offences this year from North Korea, while 20 are from eastern European nations - Bulgaria has 11.

North Korea's ambitions are not limited to winning medals. They extend to hosting the World Championships.

The country made an unsuccessful bid to host the 2017 World Junior Championships and Adamfi believes it will apply again for the 2018 tournament.

He will discuss the bid at this week's World Championships and, while acknowledging there would be "operational challenges", he is confident North Korea could cope.

Part of this confidence comes from his four-day trip to North Korea in 2013 to oversee their hosting of the Asian Interclub Cup, staged in front of a watching Jong-un in a 6,000-capacity stadium which Adamfi puts on a par with a typical Olympic weightlifting venue.

The competition was notable not just because North Korea hosted 12 nations but that one of those was South Korea - a country with which it is officially at war.

According to government officials in Seoul, it was the first time South Korean athletes have attended an international sports event in North Korea.

In another ground-breaking move, the South Korean team were allowed to march with their national flag and play the national anthem.

"I don't think there's much doubt North Korea would see it as a coup to hold a big global tournament," says BBC's Seoul correspondent Steve Evans.

"They seem to yearn for acceptance as a normal nation and that would confer it.

"There are heavy sanctions against North Korea by the US and others, so there is the question of whether teams representing nations would be sanctioned to go."

British Weightlifting performance director Yule acknowledges that a decision about whether a British team would be happy to compete in North Korea would be taken by people "higher up the food chain".

The prospect of North Korea opening its borders in a sporting sense remains to be seen.

In the short term the shoe is on the other foot. In Houston next week, America will host athletes from North Korea and Iran despite there being no diplomatic relations between the countries.

"It is the power of sport, having North Korea or Iran participating," says Adamfi. "Although on a diplomatic level there are some issues, at the World Championships they are not enemies but competitors."

Britain's Smith adds: "It's a beautiful thing to see if you think about the situation in the world."

"You would see them in the elevator and the food hall and I remember them being quite cheerful."

There may be plenty more for North Korea to celebrate in Houston, at the Rio Olympics in 2016, and perhaps even in front of a home crowd in Pyongyang in the not-too-distant future.