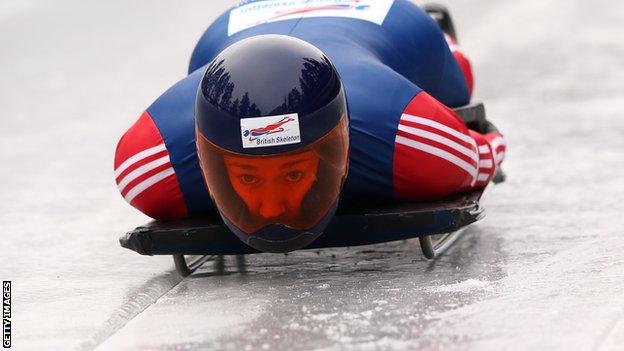 Yarnold won the overall 2013-14 World Cup title in only her second full season at senior level - she finished on the podium in seven out of the eight races, winning four of them. She had been fourth in 2012-13 standings.

The 2012 world junior champion won bronze in the senior event the following month, and was fourth in 2013.

I love what I do. I am an athlete and am extremely competitive, but what is better than sliding down an ice track at 90 miles an hour?

She blacked out during a training run for a World Cup race at Whistler in 2012.

"I went into the last corner and there was so much pressure my brain just wasn't prepared, or couldn't take it so I just switched off," said Yarnold.

Incredibly she finished third in the race itself two days later.

Yarnold hoped to be put forward for the modern pentathlon but instead skeleton was suggested. She took up the sport in 2009 and admits: "I was petrified for the first year."

Her sled is called Mervyn. It is named after a man she met while working for an insurance underwriter.