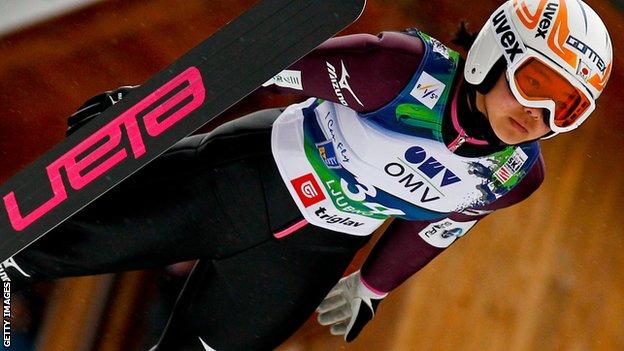 She only turned 17 in October, but Takanashi's recent form means she will be red-hot favourite when women's ski jumping makes its Olympic debut in Sochi.

The schoolgirl was in dominant form last winter when, aged 16, she became the youngest individual winner of the overall World Cup title.

She won eight of 16 events, finishing on the podium 13 times. She also helped Japan claim team gold at the 2013 World Championships and leads the latest World Cup standings, with 10 wins from 13 competitions in 2013-14.

I come from a ski jumping family. My brother is four now and he is also starting to eye the jumping skis

Takanashi conceded she was disappointed to only claim individual silver at the World Championships in February.

She missed out on the title by just 1.5m and vowed to improve by mastering telemark landings - with one foot in front of the other - which are required to avoid points deductions.

The gold went to Sarah Hendrickson, who is Takanashi's self-proclaimed role model yet also her biggest rival. However, the American's preparations for Sochi have been hampered by the cruciate ligament injury she suffered in August.

She says her excellent sense of balance was honed during ballet training as a child.

Takanashi, who stands under five feet tall, comes from a ski jumping family, and took up the sport aged eight: "I was frightened at first, but once I jumped, I found it was fun - it is just like being a bird."