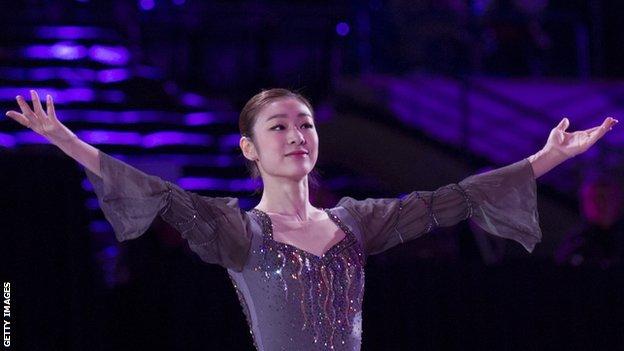 She held firm under massive expectation to win the 2010 Olympic ladies' singles title with a world record score, making her the first South Korean to win a Winter Olympic medal outside of speed skating.

The 23-year-old has won medals at all six World Championships that she has competed in, including gold in 2009 and 2013, when she returned from a season-long sabbatical to win by the largest margin since the new scoring system was introduced.

Kim will retire after Sochi.

In August 2010, she split from her coach Brian Orser in acrimonious circumstances.

She decided not to compete in the 2011-12 season, saying she "needed to take a breather".

She is a huge superstar in South Korea, where she is known as Queen Yuna.

Kim was the only Winter Olympian to make it into Forbes' Top 10 Highest Paid Female Athletes list of 2013. The magazine reported that she had made $14m (6th in the list) in prize money, endorsements and appearance fees from June 2012 to June 2013.

She has been in the list for the last five years, even though during that time she took a year off competing.