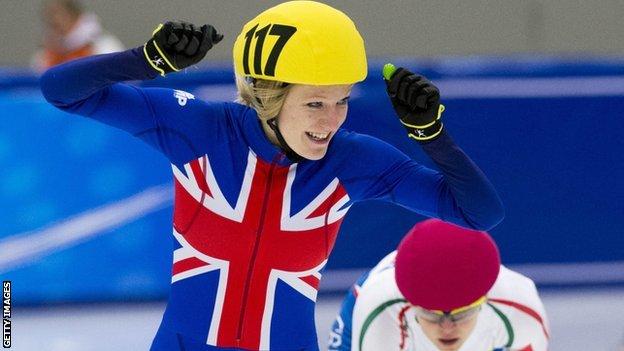 SHORT TRACK SPEED SKATING - World Cup, Turin (7-10 November): The third World Cup competition of the season, but crucially the first of the two Olympic qualifying events. One of Great Britain's leading Sochi medal hopes, Elise Christie, will be among those competing.

FIGURE SKATING - Tokyo Grand Prix (8-10 November): Among those competing are world champion ice dance couple Meryl Davis and Charlie White, while 2013 world bronze medallist Javier Fernandez of Spain makes his first appearance of the season. The Tokyo competition is the fourth of the six events that lead up to the Grand Prix final in December.

Most of the Winter Olympics sports are yet to get their seasons under way but the events will soon be coming thick and fast.

Downhill Olympic champion Lindsey Vonn says she is on track for Sochi after recovering from the knee ligament damage she suffered in a crash at the World Championships earlier this year.

Vonn, who missed the season-opening giant slalom event in Austria, told a US TV channel last week: "I've only been on snow for a few days, but I'm already almost right back where I was."

The 29-year-old American is likely to begin her season at Beaver Creek at the end of this month.

British biathlon's governing body says it "cannot function in its current form" beyond the Sochi Winter Olympics and has no money for the 2014-15 season.

The British Biathlon Union said it was considering options for the future and had briefed athletes and staff. It added that its financial difficulties will not affect British biathletes in this Olympic season as they battle for a place in Sochi, where Team GB is hoping to have two athletes (one male and one female).

Britain's curlers were in action in Canada at the weekend. Eve Muirhead lost 7-5 to reigning Canadian champion Rachel Homan in the Grand Slam of Curling Masters final while David Murdoch lost in the quarter-finals.

The next major event for Muirhead and Murdoch and their teams will be the European Championships later this month.

The third leg of the Grand Prix season took place in China at the weekend.

World silver medallist Denis Ten returned from a back injury to finish fourth on his seasonal debut in an event won by 2012 world junior champion Han Yan of China. Teenager Maxim Kovtun was impressive in second place, showing he could be a threat to Yevgeny Plushenko in the battle for Russia's one spot in the men's competition.

In the ladies' event, 2012 world champion Carolina Kostner of Italy was third.

Meanwhile, world and Olympic ladies' champion Yuna Kim revealed last week that she is "70%" recovered from a foot injury that she incurred in September and which has ruled her out of this season's Grand Prix events.

The international skiing federation (FIS) has called on all winter sports governing bodies to oppose any plan to stage the 2022 World Cup in the winter, fearing it will damage their own competitions. The IOC has also been monitoring any developments that could affect "the uniqueness of the Olympic Games" and its revenues.

New IOC president Thomas Bach made his his first visit to Sochi since taking over from Jacques Rogge, and professed himself happy with the progress made on the Olympic venues although he warned that the 100 days leading up to the Games would be "the toughest ones" in the preparations for the Games.

Russian president Vladimir Putin has insisted that gay and lesbian athletes have nothing to fear at next year's Winter Olympics, despite a new law banning "homosexual propaganda" towards people under 18.

The Olympic torch is now about a quarter of its way through its marathon journey, and has made its way to Russia's frozen north near the Arctic Ocean.