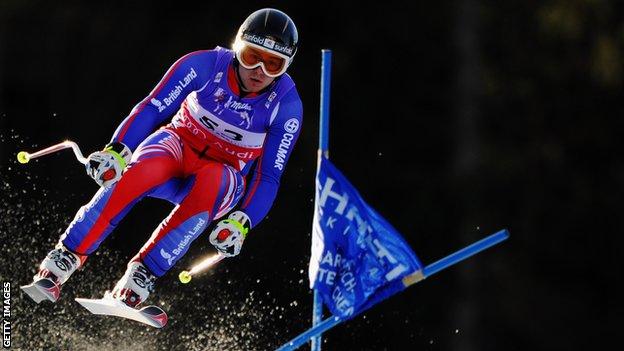 Britain's top super-combined skier TJ Baldwin says not qualifying for the Winter Olympics would be a failure.

The 23-year-old from Tharston has until 20 January to meet the standard for Sochi 2014 in Russia.

"If I don't qualify I would see myself as underachieving. I've always had my dream of going to the Olympics. It's always been the main goal."

TJ Baldwin will need to achieve two top-10 Europa Cup finishes or a top-30 World Cup finish, as well as a top-100 world ranking to qualify for the 2014 Winter Olympics

Baldwin narrowly missed out on qualification for Vancouver three years ago, but has spent the last three years among Britain's best alpine skiers and was

His best hope for Sochi lies with the downhill, in which he needs to maintain his top-100 world ranking and achieve a top-30 finish in a World Cup event, or two top-10 finishes in a Europa Cup event before 20 January.

"I'm hoping to get it done before Christmas," said Baldwin, ranked 94th in downhill and 88th in super-combined.

"I was close four years ago in Vancouver, which was a surprise actually. That gave me some real belief towards Sochi.

"The last couple of years I have tried to put on some weight and worked on my tuck, aerodynamics and letting the skis run, which has helped massively in downhill.

"That's the event I'm hoping to qualify for in Sochi."