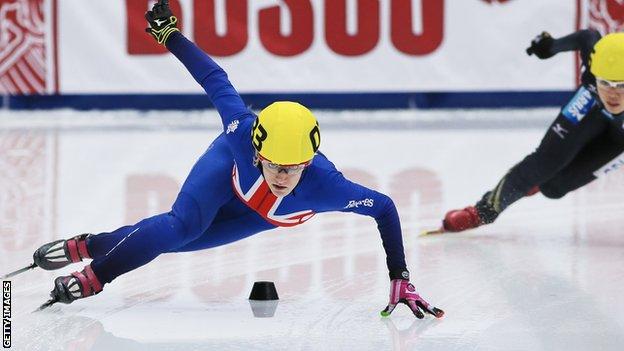 British medal prospect Elise Christie "thought her Olympics were over" after a crash during Saturday's short-track World Cup in Russia.

Christie, 23, was involved in a collision during her 1500m semi-final and taken to hospital as a precaution.

"It's the worst-case scenario that your main athlete gets injured and it could have been a career-ending injury."

The event, in Kolomna, is the last of two Olympic qualifiers ahead of the Sochi Games in February.

Elise Christie races in all three individual events - the 500m, 1,000m (in which she has topped the world rankings and won a world bronze medal) and 1500m.

Christie did enough in Turin last week to effectively secure three berths for Britain at the Games and was helping to earn more places on behalf of her team-mates.

The Scot was the world number one in the 1,000m event for much of the past two years, and won world bronze over the distance earlier in 2013.

"On the last lap, a Korean skater stumbled and fell into the barrier, and Elise fell into her," said Horsepool.

"An Italian fell into both of them and the Korean's skate went into Elise's leg. She's got two cuts and quite a big bruise - the blade scraped the skin, like being on asphalt.

"All the doctors and medics jumped on, it was quite a bad pile-up. Elise went into a bit of shock, she thought her Olympics were over. It was a massive fright for us all."

Both British relay teams are set to miss out on the Games after failing to secure the top-six places in Kolomna which were needed to keep their hopes alive.

There has never been a British women's relay team at the Olympics, but the men's relay squad are previous holders of the world record and have won World Cup medals in the past.

"The men ended up with three of the top four teams in the world in their heat," explained Horsepool. "We were within half a second of getting through. We were good, but not good enough to cope.

"It was pretty devastating. The guys are very disappointed and we have some tough decisions to make about who goes to the Games."

The International Skating Union is expected to release the final quotas for Sochi 2014, which will detail how many places British skaters have earned, in late November or early December.

Unofficial British calculations suggest Team GB can currently expect three men and two women at the Games, with a day's racing in Kolomna still to come. Both relay teams qualifying would have handed Britain the maximum 10 places.

"It's been traumatic but it's not a disaster," said Horsepool. "Our medal hopes are still intact."