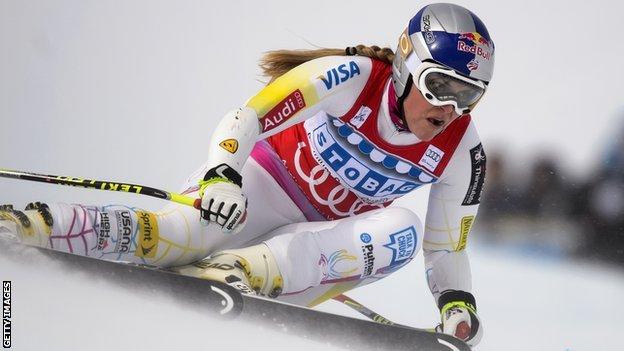 Olympic downhill champion Lindsey Vonn re-injured her surgically repaired right knee in a Colorado training crash ahead of her return to racing.

The 29-year-old American partially tore the right anterior cruciate ligament that she injured in February.

US Ski Team medical staff did not put a date on her comeback, saying "her response to therapy will determine the timetable for her return".

The women's downhill at Sochi 2014 will take place on 12 February.

Vonn also suffered a mild strain to the knee and cuts to her face and shoulder in the accident at the Copper Mountain resort.

"She plans to rest for a few days before pursuing physical therapy," added US Ski Team spokesman Tom Kelly.

The injury is likely to scupper Vonn's planned comeback at the World Cup event in Beaver Creek at the end of November. It could also put in doubt her bid to defend her Olympic crown at Sochi in February.

The four-time overall World Cup champion only started training in September after being out for seven months with ruptured ligaments following a crash at the World Championships in Schladming, Austria.

Vonn's friend and team-mate Julia Mancuso tweeted on Tuesday: "Let's all send Lindsey Vonn our positivity and hope for the best."