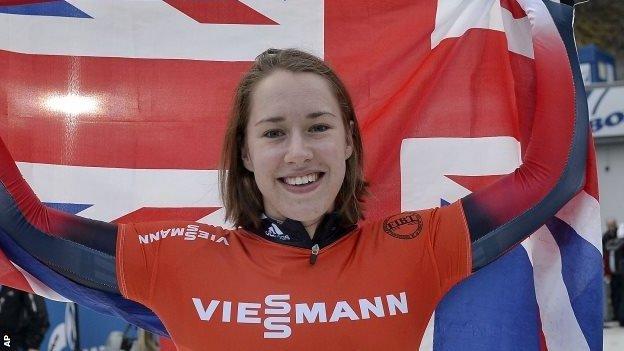 Great Britain could be set for a record-breaking medal haul at the Winter Olympics in Sochi, according to a statistical study.

The work, by Infostrada Sports, predicts that Team GB will win six medals, including one gold.

That would surpass their previous best Games haul, from Chamonix in 1924.

And the tally would also outstrip GB's performances at the last two Winter Olympics, when they picked up one medal in Vancouver and one in Turin.

UK Sport is set to announce its official medal targets for the Games next week.

The study, based on recent results, predicts gold for Lizzy Yarnold and silver for Shelley Rudman in the skeleton, silver for the women and bronze for the men in curling, as well as bronze medals for freestyle skier James Woods and speed skater Elise Christie.

British Skeleton's Louisa O'Riordan believes her team can live up to expectations in what has been Great Britain's most successful winter sport in recent Games.

She said: "We're delighted with some of the performances so far this season, and provided our sliders stay healthy, we hope to be competitive in Sochi."

"Our own ambition is to have both our teams in the medal zone," he said. "I think we're in a position to achieve our best result. We've upped the volume and the quality of training. Nothing has been left to chance after the disappointment of Vancouver [in 2010, when Great Britain failed to win a curling medal]."

However, he said it is impossible to predict with any certainty how the country's Winter Olympians will perform.

"In curling, if somebody drops a single hair on the ice, that can change the course of a stone," he added. "Even the smallest unpredictable thing can change the outcome."

Six medals would place Great Britain 18th in the projected medal table, behind the Czech Republic and Italy, but above traditional Winter Olympics powerhouse Finland. Norway are tipped to top the table.

Infostrada's prediction for the 2012 London Olympics forecast 66 medals for Great Britain. The team went on to win 65.