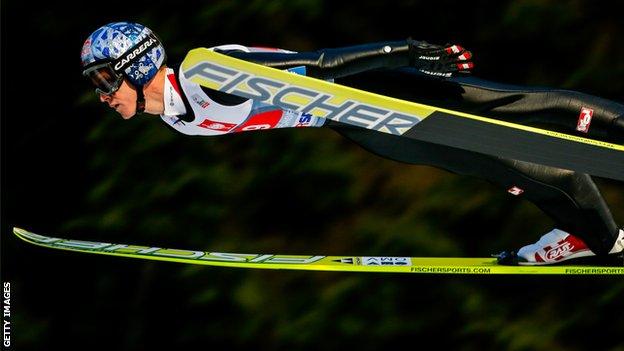 The Austrian, 27, lost consciousness but was able to speak after the crash and is in intensive care in Salzburg.

Josef Obrist, the doctor treating him, has said his life is not in danger.

It follows the skiing accident which has left former F1 racing driver Michael Schumacher in a critical condition after falling 12 days ago.

Morgenstern, one of Austria's leading gold medal hopes for the Sochi Winter Olympics, lost his balance in the air and landed on his back and head, the International Ski Federation said on its website.

Morgenstern, who won two Olympic titles in the individual and team large hill event in Turin in 2006 and a team large hill gold in Vancouver in 2010, also crashed earlier in the Olympic season following a jump at the World Cup in Titisee-Neustadt, Germany, on 15 December.

He suffered several bruises, face cuts and a broken finger but still finished runner-up to fellow Austrian Thomas Diethart in the Four Hills Tour last week and is currently fifth in the World Cup standings.

Coach Alexander Pointner said: "We can only hope for the best. This really hurts because we are all very close. Thomas is the heart of this team."

The opening ceremony for the Sochi Games takes place on 7 February.