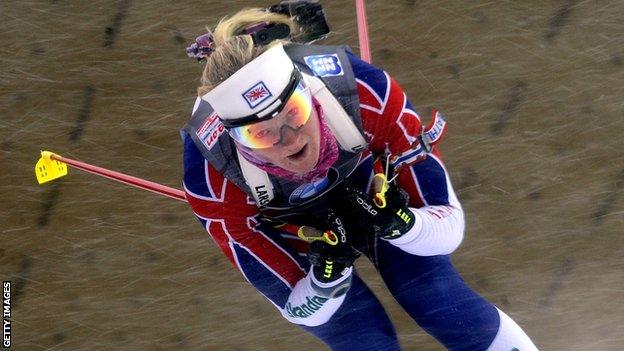 Biathlete Amanda Lightfoot hopes to be competitive at the Winter Olympics, just seven years after learning to ski.

The 26-year-old from South Shields was last Monday and her inexperience is a contrast to team-mate Lee Jackson, who first competed in biathlon 15 years ago.

An event in which athletes compete in two sports: cross-country skiing and shooting.

Athletes receive time-penalties, dependent on their ability to shoot at targets.

"I was 19 before I even put any skis on and before that I had no real sporting background," she told BBC Newcastle.

"I'm aiming for the top 30 in the long race, that'd be a real achievement."

Lightfoot will compete in at least two events, a 15-kilometre race and a 7.5km 'sprint' event, with the possibility of a third.

The top-60 finishers in the 'sprint' will qualify for the 10km 'pursuit', where competitors start at staggered times dependent on their placing in the previous events.

The sport is dominated by Scandinavia, Germany and Russia, accounting for eight of the 10 gold medals won at Vancouver 2010.

Lightfoot is currently enlisted in the British army, whose relationship with the British Biathlon Union led to her taking up the sport, but funding for Team GB biathletes will not be continued beyond the Sochi Games.

"I owe everything to the army," Lightfoot added.

"They have been incredibly supportive of me since I took up the sport and obviously I wouldn't have made the Olympics without them."