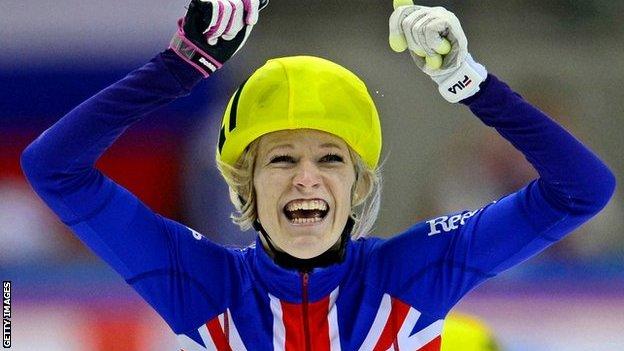 Christie won world bronze over 1,000m last year and is considered an Olympic medal contender over the distance.

However, British performance director Stuart Horsepool played down the consequences of Christie's victory.

"This doesn't mean, in the big scheme of things, she'll be a favourite for anything," Horsepool told BBC Sport.

Britain concluded the European Championships with silver in the women's 3,000m relay, behind the Dutch, as squad member Alex Stanley made her last appearance for GB before retiring from the sport.

The 25-year-old will not travel to Sochi having missed out on selection last year, when the women failed to qualify for the Olympic relay event.

Christie finished fourth in her opening European event on Friday, losing her 1,500m title as Ter Mors won gold, while Saturday saw Christie miss out in the semi-finals of the shortest event on the programme, the 500m,

"She is still struggling with race tactics and the whole competition environment. She may be comfortable doing the 1,000m but she didn't skate as well as she has done.

"We've still got some work to do in getting her to perform at this level in the Games."

One of Christie's leading rivals over 1,000m, the Olympic and world champion Wang Meng, from China, broke her ankle in training last week and may miss the Games.

The 28-year-old's anticipated absence would make Christie's path to gold slightly easier, though Chinese team-mate Fan Kexin, Ter Mors and a South Korean contingent led by Shim Suk-hee will be in contention.

Horsepool believes holding a European event so close to the Games may help Christie's cause against Chinese, Korean and North American skaters.

"In the past, the Euros has been a bit of a soft touch. But in the last Olympic [four-year] cycle, the Europeans have really come to the fore," he said.

"It's a good thing to have this sort of competition close to the Games. The skaters haven't really raced competitively for about 12 weeks, all they've done is train really hard. No matter how hard you train, you haven't got the intensity and stress levels of a competition.

"I think the Europeans have got a bit of an advantage going into the Olympics. Elise will be stronger and hopefully more mentally prepared."

Whelbourne and Shoebridge both went out in Sunday's men's 1,000m quarter-finals, while Gilmartin reached the women's semi-finals.

"They've been in the mixer. We've had some good performances, without sparkling," said Horsepool. "We need to find another gear if we're going to do more damage in Sochi."