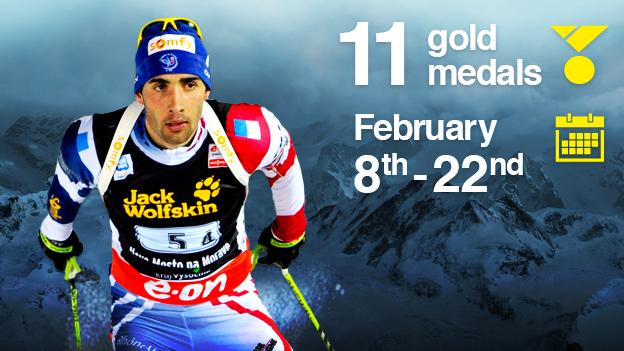 Biathlon is the sweatiest sport at the Winter Olympics - male athletes typically produce 2.3m litres (four pints) of perspiration in the 20km race.

Across the 11 events, biathletes cover distances of between six and 20km, stopping at a shooting range either two or four times to fire at five targets - sometimes as small as golf balls - from 50m.

In the individual event, each miss results in a one-minute time penalty; in other events, a 150m penalty loop must be skied instead.

Great Britain's two representatives, Lee Jackson and Olympic debutant Amanda Lightfoot, have no chance of a medal but finishing in the top half of the field would represent a creditable display.

Another Norwegian, Tora Berger, was the outstanding woman at last year's World Championships, winning six medals - four of them gold - and Norway are leading contenders for all three relay events.

That's good news for Norway, who have won the event at the last three World Championships.

Crews had to hit targets - shaped as helicopters, tanks and houses - from distances of up to 2,200m.

The USA has been invited to compete at the next contest in the hope of easing tension between the former Cold War rivals.