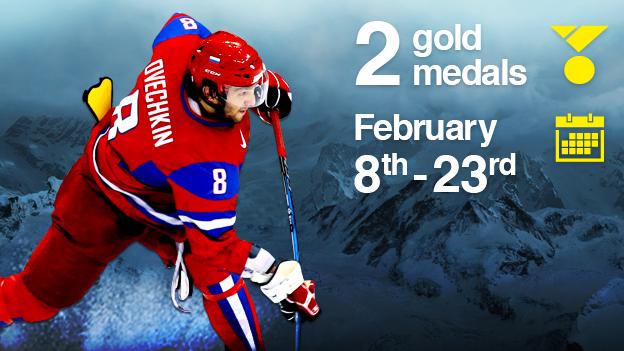 One of the oldest Winter Olympic disciplines, by virtue of its inclusion at the 1920 Summer Games, ice hockey is the only full contact sport taking place in Sochi.

The competition begins with a group stage for both men and women, followed by a knockout stage beginning with the quarter-finals.

A maximum of six players per team are allowed on the ice at any given time, but unlimited substitutions are permitted.

Great Britain's men and women both failed to qualify for this year's event.

Canada won gold as hosts in 2010, a feat that 2012 men's world champions Russia hope to emulate.

The USA's most recent gold was the 1980 "Miracle on Ice", while their last medal outside of North America was in 1972.

All four women's gold medals have gone to Canada or USA - expect their increasingly bitter rivalry to continue.

NHL-size rinks (85ft x 200ft) were used in Vancouver, but Sochi sees the return of the 100x200ft rinks normally used for Olympic competition.

Squads for the men's tournament have grown from 23 to 25 players, while the women's format now pits the top four seeds against each other in the group stage.

An average collision between male skaters, who reach speeds of up to 24 miles per hour, generates a G-force of 19 - which is roughly equivalent to a 30mph car crash.