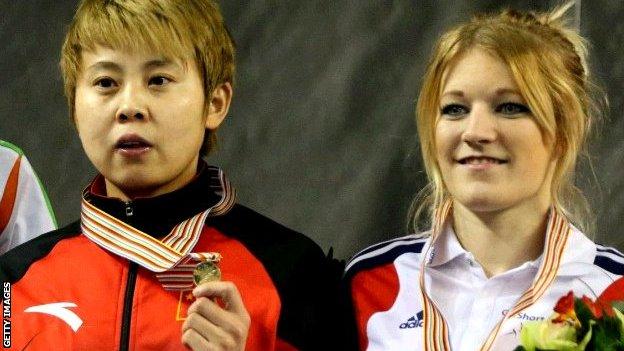 Newly-crowned European champion Elise Christie says injury to a leading rival means there is "all to play for" in her short-track events at Sochi 2014.

World and Olympic champion Wang Meng is unlikely to defend her 1,000m title at the Games after breaking her ankle.

"I was pretty devastated for her, she's someone that has a lot of respect in this sport," said Scot Christie, who in Dresden..

"But it'll make a difference. It'll be quite a lot different without her."

The Chinese 28-year-old (pictured above left with Christie in 2013) has six Olympic medals to her name, including four golds, and 18 world titles spanning more than a decade.

She damaged her ankle in training last week and while a return in time for the Games is possible, it is not thought likely.

Speaking to BBC Sport, 23-year-old Christie added: "She's an amazing athlete. It could be her last Games, and [the injury] is sad for anyone.

"She's one of the top skaters, especially tactically - she just takes control."

Tactics have traditionally been Christie's weakness, despite her status as a world bronze medallist and now double European champion in the women's 1,000m race.

Christie is known for her fast start and ability to lead the race from the front, but has recently worked hard on her strategy when things go wrong and she finds herself at the back of the pack.

She said her plans between the Europeans - her last pre-Olympic event - and the start of racing in Sochi would involve "a step back physically and a focus more on the tactical side".