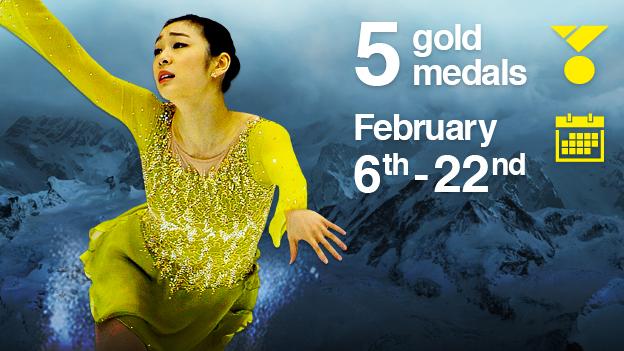 The inclusion of a team competition for the first time means there are five events, all performed to music.

Each event comprises two segments: a short routine, in which skaters must perform set technical elements, and a longer, higher-scoring routine which allows more creative licence.

A panel of nine judges score on choreography and technical proficiency.

Britain has a fine history of figure skating Olympic medallists - but the key word is history. There will be British involvement in all events in Sochi bar the men's, with a top-10 finish the official target.

Most likely to achieve that are European bronze medal-winning ice dancers Penny Coomes and Nick Buckland.

Russia has a proud figure skating tradition - Tatiana Volosozhar and Maxim Trankov could be their best hope of a gold.

The team event makes its debut, and the ice dance has been streamlined from three routines to two.

Figure skating made its Olympic debut in 1908 - at the summer Games. Despite being a traditional winter sport, the International Olympic Committee approved its inclusion because it took place indoors.

It featured again in 1920 before making a permanent switch to the Winter Olympics in 1924.