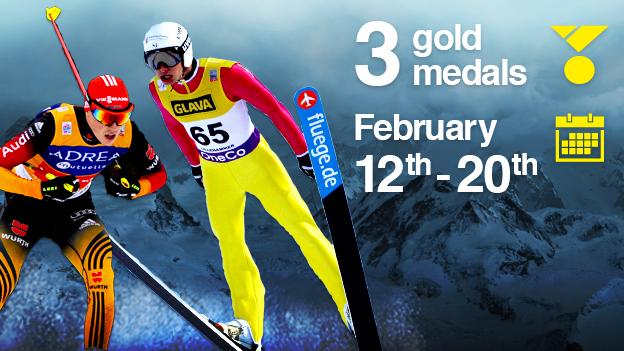 Nordic Combined, the only male-only Winter Olympic sport, consists of ski jumping and cross-country skiing - in that order.

It requires a marriage of explosive power for the ski jumping, and endurance for the cross-country race.

The leader after the ski jumping is given a head start, with a time handicap for the other athletes based on how many points they finished behind.

No British athlete has qualified.

Norway have won three of the last four team gold medals, but failed to make the podium at the 2013 World Championships.

Not much. The wind and gate compensation system makes its debut for the ski jumping phase - ironically in a sport where athletes leap down a mountain, the system is designed to make the competition a level playing field.

A complicated formula negates any advantages or disadvantages from wind changes or starting position. Disclaimer: Applicants without A-Level maths need not apply.

The RusSki Gorki Jumping Center that will host the ski jumping element of the nordic combined was named after the English slang term for someone of Russian nationality: a Russki.