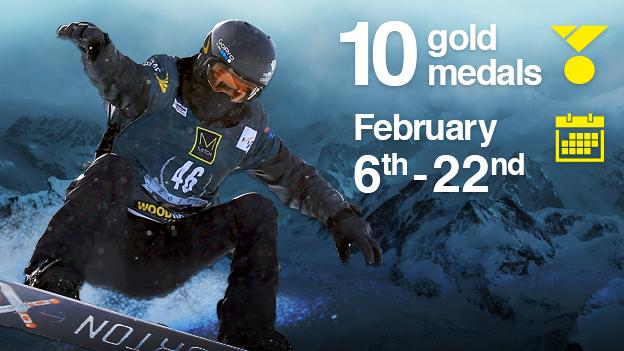 There are five diverse events each for men and women. Slopestyle and halfpipe are judged disciplines, where big jumps, tricks and style are king.

Parallel slalom and parallel giant slalom have more in common with alpine ski racing, while snowboard cross - a race down a bump-laden course - somewhat bridges the divide.

A knockout format is used in all events.

Great Britain have been set a target of one to two medals across the snowboard and freestyle skiing events.

Winter Olympic stars don't get bigger than Shaun White - and a third consecutive halfpipe gold medal is his aim.

Torah Bright will defend her halfpipe title. The Australian will also become the first athlete to compete in three snowboard disciplines at a single Winter Olympics by riding in the slopestyle and snowboard cross competitions.

There are two new events: parallel slalom, in which competitors go head-to-head down adjacent courses, and slopestyle, which involves trying to impress the judges with tricks on a course of man-made jumps, rails and boxes.

Snowboard cross races will have six riders rather than the four they had in Vancouver, making thrills and spills more likely.