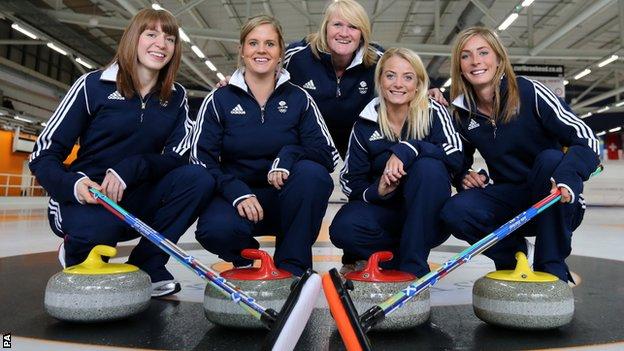 Great Britain's team for the Winter Olympics is the strongest for decades, according to its medal hopefuls.

Britain returned from Vancouver 2010 with one medal, but are tasked with winning at least three in Sochi.

Amy Williams was the sole British success four years ago, winning gold in the skeleton.

Funding body UK Sport expects a minimum of three medals of any colour after investing £13.45m but believes the squad to be capable of winning up to seven medals at February's Games.

"Team GB are in a great spot for Sochi," said Eve Muirhead, skip of the British women's curling team, a major medal prospect as the defending world champions.

"We've got so many medal hopefuls going in.

"I've got three young girls behind me who are great. We've put in so much work and they have the same goal as me - get that Olympic medal. It's the only medal I'm missing."

David Murdoch, skip of the world bronze medal-winning men's team, added: "It's good to be part of a team that has a real buzz.

"You look at the results of a lot of the other athletes around - the form of skeleton and short-track - and there's good momentum here."

"It's nice to go [to Sochi] as a huge team and see that we might have the chance to win a lot of medals," said Buckland.

"The bronze medal is such a confidence boost for us. It shows we can be up there with the best in the world."

Pairs skater David King said: "This winter team is amazing, we've got such strength in depth.

"We couldn't say that in Vancouver, but here we're really ready and I'm looking forward to some great performances on the back of a great London Olympics."

The Winter Olympics begin in the Russian city of Sochi on 6 February, a day ahead of the official opening ceremony.

No British team in history has returned from a Winter Olympics with more than one gold medal.